Driving around Donegal for weeks I didn’t see a cat anywhere. Then one day a man in Crolly told me why 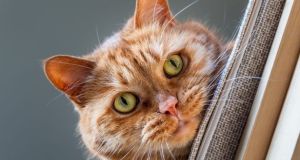 Despite Charlie’s long claws, huge fangs and the gape of his mouth when he yawns, he’s a great companion during lockdowns. File photograph: iStock

I was keeping indoors, waiting for the postman, and tracking Trump on CNN, in between conversations with the cat.

Together we watch Trump every day. Charlie, the big black tom, straddles my lap with such serenity that I wonder might Trump not benefit from being reincarnated as a cat. Although the thought of a marmalade Trump replete with an orange tail and whiskers exuding toxic emotions, while sitting on my lap is a terrifying prospect. And I’d hate to imagine what Trump might do to a mouse.

Not that Charlie, my black tom, is tolerant of mice. He treats them with the same sadistic pleasure as any member of his species. And he’s cantankerous at times, especially when his dinner is late or if he is forced to wait outside the door too long in the mornings. But despite his long claws, huge fangs and the gape of his mouth when he yawns, he’s a great companion during lockdowns.

Outside my window the trees lose more leaf every day. In the distance I see the neighbours’ chimneys wheezing smoke. They too have been indoors for a while. They too have cats. They too wait. It’s what we, the old battered elders do best, in this year of Covid-19; we wait and watch the leaves come and go, bloom and die, because we have no choice but to shelter indoors and let the Sitka woods grow tall.

I spent summer in west Donegal, where the ocean reflects light onto every headland and cliff. I’d be there still if it were not for the cat; I couldn’t bear to abandon him in Leitrim, and I don’t think he’d survive in Donegal.

Young men drive so fast around here, that any tabby with intelligence would never come out from under the chair in the kitchen

Driving around Donegal for weeks I didn’t see a cat anywhere. I asked a man in Crolly one day about this and he said there were plenty of cats but that it was too windy for them to be outside.

Which sounded plausible, and since Donegal men are always outdoors, it only makes sense that the cats would remain indoors.

But he said there might be another reason why Donegal cats stay close to the fire.

“Well,” he said, “young men drive so fast around here, that any tabby with intelligence would never come out from under the chair in the kitchen”.

“So, you’re saying it’s either too windy, or too dangerous for cats?” I conjectured.

“Yes,” he said, “and there’s a third possibility: sometimes it’s too noisy.”

“Donegal men enjoy the outdoor life so much,” he explained, “that on a clear day the lawnmowers around the hillsides kick up a terrible ruction, like a swarm of bees in the wind, as they shave their lawns smooth as billiard tables.”

In fact I had noticed the tight cut on grass from Bloody Foreland to Burtonport. And in one filling station I saw toy lawnmowers for sale. I’ve seen toy tractors, toy cars, and even toy fire brigades, but toy lawnmowers was a new one on me. So the children are groomed into the joy of clean lawns from an early age, and outdoor cats would need headphones if they wanted to have a sleep on any porch or doorstep.

I’m always promising to do more in my own garden but I never have the energy. Last week I wrote about a magnolia plant in this column and promised to talk with it every day. But did I?

Did I even nod at it?

I spent the week watching Trump on CNN and when I looked out the window the tree was weeping.

I went out and said.

“You never talk to me,” the tree said. “After you promising in your column that you would.”

“But you always say that,” the tree cried.

And in a way the tree was right. I’m a lazy couch potato. I’m full of good intentions but I’m a wretched hypocrite.

I don’t even go to a church on Sundays, and yet I’m never done talking about religion. I binge on wine and cheese while I’m surfing videos of gurus and ascetics who live in various deserts.

I live the imagined life. It’s the same in the garden. I talk about loving trees but I don’t even sweep up the leaves. The strimmer sleeps with the lawnmower in the shed, as the wilderness encroaches, as I hold the cat on my lap and doze on the couch; dreaming of cosy kitchens in Donegal.