Tanya Sweeney: The most dispiriting celebrity interviews I have conducted 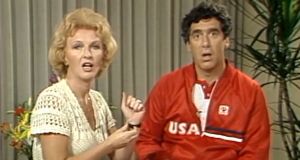 Leta Powell Drake says to Elliott Gould, ‘But they’ve all made a fortune, Elliot,’ like a frustrated stage mum

If you haven’t had the pleasure yet, might I suggest you find yourself some internet and look up Leta Powell Drake. Last week, the celebrity interviewer, who ran amok on Hollywood junkets in the 1970s and 1980s (though is still working today), enjoyed a surprise resurgence when clips of her interviews went viral.

“You’ve done some brilliant pictures, you’ve done some stinkers,” she tells Gene Hackman. She admonishes Tom Selleck for “turning down the role of Indiana Jones”, to his evident chagrin. On not appearing in the long-running TV series based on the movie M*A*S*H*, Powell Drake says to Elliott Gould, “But they’ve all made a fortune, Elliot”, like a frustrated stage mum. “He looks evil,” she informs the camera of a nonplussed Tim Curry. “You might just whip one out?” she asks of Telly Savalas, before going in for a rather luvvie double-kiss.

There are video clips galore online that are the gift that keeps on giving, but Powell Drake’s compilation of Hollywood videos, truly, is next level stuff.

Why has this clip caught the attention of so many people, and why now? One reason is that it speaks to a bygone era, when journalists acted like peers within the inner sanctum of the celebrity industry. Certainly, she has the gait of an insider, gabbing with the rich and famous as an equal; in some cases, taking them to task like they are wayward children. There is no slobbering sycophancy or genuflecting, if anything, she caught many a star off guard with her sheer savagery. The lack of a boundary, both physical and psychological, is staggering.

I’m hardly divulging a secret, but things are very, very different nowadays. The celebrity savagery is very rarely allowed to happen, for a start. Stars and their representatives are so averse to controversy and being caught off-guard, that there are very few opportunities for journalists to go free-range in a celebrity interview.

Movie junkets may seem impossibly glamorous and exciting; likewise, you’d think that talking to some of the world’s most gifted, successful and adored people would make for an interesting day’s work. And I hope it doesn’t shatter the illusion too dramatically to divulge that this isn’t always so.

The celebrity interview is controlled and manipulated, like any other business. The reality makes the Horse & Hound junket in Notting Hill look like a truly thrilling afternoon. Somewhere between Powell Drake and the present day, journalists became “the help”, and interviews became an occupational hazard for a celebrity. Dealing with the enemy, even though we are working towards the same goal. Funnily enough, the bigger the star, the more relaxed they can be about interviews.

In the Covid-19 era, with most celebrity interviews happening on Zoom, things are even more unglamorous. There are NDAs (non-disclosure agreements) and paperwork galore, in which journalists often agree to stay on course by talking only about the book/film/TV show, and not anything remotely personal/topical.

Recently, I interviewed an (unnamed) actor, in a video chat set up by an American publicity company. I spent 45 minutes in a “reception suite” on Zoom, which was largely populated by other publicists. Cometh the magic moment, I was afforded seven minutes of talk time with the “talent”. There was me, him and 12 publicists on the call. I don’t know how many seven-minute conversations you’ve ever had, but it’s pretty impossible to get anything interesting out of them, much less any news that’s fit to print.

A few years ago, in a face-to-face interview, I experienced an even more dispiriting journalist/celebrity exchange. A 6am flight to the UK, and lots of train travel and hanging around later, I eventually met with a famous popstar in a music theatre at 5pm – to talk about their fairly pedestrian project for 10 minutes. A senior publicist sat in on this lightning-quick chat to ensure the star’s feathers were left firmly unruffled. I was emboldened enough to ask their views on Brexit (the star was a known Remainer), and the whiny riposte came: “Do we have to talk about politics?” The publicist, waterfall cardigan flapping a mile a minute, thundered over to literally wag a finger in my face. The star remained impassive under the publicist’s tantrum, like a school swot who has just ratted on you. With nothing worth printing, the entire exercise was a waste of time for everyone involved.

Ultimately, the bigger loser in this new world order of celebrity journalism is the reader. We’re not likely to see the glorious Smash Hits era of questioning again, when a random spray of enquiries from the music magazine – from a celebrity’s favourite pie to their first dog’s name – could elicit more colour, personality and interest than a studied monologue about their craft.

Fine, social media can mainline us straight into a celebrity’s innermost thoughts and so the interviewer’s role has changed. But sometimes, the celebrity interview, in the right circumstances, can still read like poetry.

Earlier this month, The Irish Times ran an interview between Hadley Freeman and actor Helena Bonham Carter, in which the latter ended up going to the journalist’s house. I learned more about the unguarded, unfiltered Bonham Carter as a person in that single read than a dozen junkets.

I remain utterly obsessed with Powell Drake and have ended up down a YouTube rabbit hole watching her chide and flirt with famous people. Would I have the gumption to ask Tom Hanks how he kissed underwater without bubbles going up his nose, or what “size” Scott Baio is? I’ll probably never know because there is a battalion of publicists who will stop at nothing to ensure the “talent” is never put in this position. They’ll always remain the strangest and most surreal conversations I’ve had. When it comes to entertaining everyone else, we can only hope for the best.