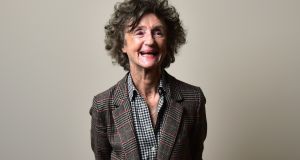 Artist, conservationist and businesswoman Lindy Guinness – also known as the Marchioness of Dufferin and Ava – has died in Belfast City Hospital. As the owner of the Clandeboye estate, a 2,000-acre 19th-century country house estate near Bangor, Co Down, she was well known in Northern Ireland and beyond for her work in agriculture, the environment and the arts. With her late husband, Sheridan Hamilton-Temple-Blackwood, she was at the centre of the London arts scene in the 1960s and 1970s.

Guinness established Northern Ireland’s only yogurt-production facility on the estate in 2009, and the yogurt pots feature her paintings of the Clandeboye herd of pedigree Jersey and Holstein cows. Just weeks before her death, a £2 million expansion plan for the yogurt-making business was announced that will see a new factory built on the grounds to quadruple production and employ 13 more people.

The estate, which she inherited from her husband following his death in 1988 from an Aids-related illness, hosts the annual Clandeboye Festival with chamber orchestra, Camerata Ireland and internationally renowned pianist Barry Douglas.

Guinness also opened the Ava Gallery in the courtyard in 2003, where she regularly hosted exhibitions. She ran charity events and hosted everyone from Prince Charles to Van Morrison at her home.

Serena Belinda Rosemary Guinness was the second of two children of financier and MP Loel Guinness and his second wife, Lady Isabel Manners (the daughter of the 9th Duke of Rutland). She was born in Prestwick Airport, where her father was stationed during the second World War. She later recalled, “He said the birth should take place at the airport to cheer everyone up … New life in the middle of war.” Her father, who had been a fighter pilot in the Battle of Britain, taught his little daughter to fly a helicopter, perched on his knee.

With her older brother, William Loel Guinness, Belinda (later Lindy) Guinness grew up in Belvoir Castle, the seat of the Dukes of Rutland in Leicestershire. Her parents divorced when she was nine, after which time she split her time between her mother’s ancestral home at Belvoir Castle, and Palm Beach, Florida, where her father spent winters with his third wife, Gloria Guinness (nee Rubio). While in Florida, Lindy befriended Truman Capote, who was a house guest of the Guinness family. As a child she also went diving with Jacques Cousteau, whom she met on a yacht with her father in the south of France.

At a Guy Fawkes party in 1958, she met Bloomsbury painter Duncan Grant which sparked her interest in painting. She said later, “I was a dizzy, privileged, slightly lost teenager. It was one of those chance meetings that change the course of one’s life.” Watching with fascination how Grant painted the bonfire and people around it, she introduced herself, and he became a lifelong friend and mentor to her. Guinness went on to study art at the Byam Shaw School of Art [later absorbed into the Central Saint Martins’ College of Arts and Design], the Chelsea School of Art and the Slade. She also studied under the Austrian artist Oskar Kokoschka in Salzburg.

In October 1964 she married her fourth cousin (through her great-grandfather Edward Guinness) Sheridan Hamilton-Temple-Blackwood at Westminster Abbey. The glamorous reception, held across three floors of the Cafe Royal, had 1,800 guests, including Princess Margaret and Lord Snowdon. The couple spent their honeymoon driving across the US in an open-topped Cadillac, accompanied by artist and friend David Hockney.

Following their marriage, they moved into a large house in Holland Park, where they hosted many parties for the “aristo-bohemian set” during the 1960s and 1970s and were leading lights on the London art scene. The couple, who didn’t have any children, also set about restoring Clandeboye estate to its former glory.

Using the name Lindy Guinness, she first exhibited her art at the Harvane Gallery in London in 1971 and subsequently had shows in London, Belfast, Derry, Dublin (the Solomon and Jorgensen Fine Art Galleries), Paris and New York. She worked in multiple styles, from realist to abstract to cubist, but ultimately was most inspired by the landscape and pedigree herd of cows on her beloved Clandeboye estate.

She continued to paint until very recently, producing landscape paintings, which she was planning to exhibit. Her godson Harry Mount, the editor of Oldie magazine, said her death was unexpected. In a tribute piece to her in the Belfast News Letter, he wrote how she was always thinking, always trying to come up with new schemes to help Clandeboye and use the estate to help the wider world. “She was extremely funny: a brilliantly skilled tease who could diagnose exactly what you thought and what you were like and, in an affectionate way, joke about your characteristics. But she could be very serious too. Every night after dinner she would read the newspapers, and books of a high philosophical and religious quality.”

By the time of her death, Clandeboye estate was arguably at its busiest since the days of her husband’s ancestor, the 1st Marquess of Dufferin and Ava (1826-1902), viceroy of India, governor general of Canada and British ambassador to France. She had, after all, also honoured his memory by preserving his art, books and historic objects in his original house.

Covid’s silver lining: How Ireland has fallen headlong in love with its pets
Real news has value SUBSCRIBE