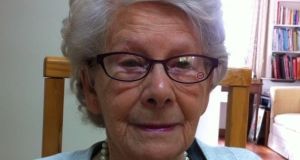 Mona Campbell, who has died aged 99, was a pioneer among women practising medicine in Ireland. Matriculating to Trinity College Dublin at the age of 16, she qualified in 1943, one of only three women to graduate in medicine that year.

She was delighted when, more than 50 years later, she was awarded an honorary MA by a female pro-chancellor, former chief justice Susan Denham, to mark the millennium.

Campbell was one of the last people to be born a British citizen in southern Ireland; she was from Newbliss in Co Monaghan, where her parents, Emily (nee Donaldson) and Thomas Kelly, were farmers.

Her unionist family fled to Belfast after the partition of Ireland, and started a bakery there. Campbell went to school at Methodist College, Belfast.

After qualifying during the second World War, she worked first in Belfast City Hospital, where the male doctors thought it was hilarious to allocate a circumcision as her first procedure. She managed this with the help of Grey’s Anatomy and an experienced nursing sister. She then worked as a locum at Warrington general hospital, relying on the expertise of the nursing staff to support her through wartime rotas, when she was sometimes the only doctor on call in the hospital.

As Campbell grew older, she coped stoically with loss of sight and kept mentally active, solving cryptic crossword clues until a few weeks before her death.

She had been introduced by her brother Basil in 1939 to Jack Campbell, a fellow pupil at Methodist College who qualified in medicine from Queen’s University Belfast, and they married in 1946, just before Jack was demobbed from the army. They set up in general practice together in Belfast.

Campbell carried on working, despite having four children. She saw real poverty among Belfast’s dockyard and unemployed workers. She told of women sewing their children into brown paper wrapping for the winter to keep warm, and of the limited treatment available before antibiotics became available on the new NHS.

She took a special interest in maternity and started a maternity unit and antenatal clinic in Belfast. She was a practical supporter of women’s reproductive choice, sympathising with women who could not face the impact of another addition to an already large family.

Her own home life was not easy. Jack was an alcoholic, hated giving injections and could not cope with childbirth, so she a took on all the maternity cases in their practice, often going out alone at night through the Troubles, to the sound of machine-gun fire.

She continued to work, despite the injury and disability of her eldest daughter at the age of 11, taking in her father-in-law and an aunt with learning disabilities to live in the family home.

Although from a unionist family, she was proud of her Irish heritage and hated sectarianism. She ensured that her children read Irish myths and learned Irish dancing. Campbell and her husband both later joined the non-sectarian Alliance Party.

In 1982,they retired to the Cotswolds where Campbell volunteered for local charities, was a keen amateur watercolourist and made a formidable bridge pair with Jack.

He died in 1992. As Campbell grew older, she coped stoically with loss of sight and kept mentally active, solving cryptic crossword clues until a few weeks before her death.

She is survived by her four daughters, Moya, Shareen, Nuala and Fiona, seven grandchildren and two great-grandchildren.