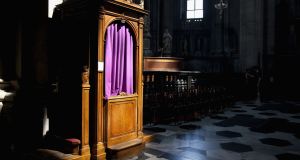 I decided to give Confession one last chance. My mother was making me go anyway. And by ‘one last chance’ I mean I opted to tell the priest the truth for a change. Photograph: Getty Images

By age 15, I already had severe doubts about God. I had a Confession routine: bit of swearing, bit of being cheeky to my mother. Out in five minutes with a few Our Fathers to say. (I could never understand why prayer – supposedly communicating with God – was also a form of punishment.)

My cynicism was largely inflamed by my mother. A daily communicant, her religious preferences tended towards the Old Testament. For her, belief was transactional: God held me in the palm of his hand, she’d often tell me, but not in a good way. At the first sign of cheek or smart-alecky, (you’ll be shocked to know I was quite the smart-ass when I was younger) he could casually squash me with a divine thumb. God was like a mafia don, demanding absolute loyalty and quite prepared to fit you with some concrete shoes if he didn’t get it.

Yet at school, there were a couple of priests who I liked, who were kind and intelligent people, and it was difficult to imagine them as willing enforcers for a mobster boss.

So, I decided to give Confession one last chance. My mother was making me go anyway. And by “one last chance” I mean I opted to tell the priest the truth for a change.

Some days before that I had had an intimate encounter with a girl, which certainly wasn’t sex, or even heavy petting. Let’s say it was petting. But I knew that anything beyond hand-holding was definitely a sin, so once we’d gone through the preliminaries, I told the priest that I had been messing about with a girl.

I had assumed the priest would only require a general description of the offence. Being a priest, he probably had a visceral disgust for such activities.

Yet his first question was, “What do you mean, messing about?”

My reply, illuminatingly, was, “You know, messing about.”

This exchange went on for some time but did make it plain that while the priest understood that my transgression was in the sexual ballpark, he wanted the details. He wanted to know who did what to whom. He wanted me to name body parts.

Mortified into silence – I was a teenager – I gave him nothing. Clearly exasperated, he eventually let me out with multiple decades of the rosary to say. I walked straight out of the church, armed with the certainty that what had just happened proved that the idea of “God” was a nonsense.

If there is a chance of finding God, perhaps it’s better to look down rather than up

But actually, it did no such thing. God is neither provable or disprovable. My encounter with a pervy priest was irrelevant.

As we all know too well, people have used religion as a cover to carry out all sorts of appalling acts, in this country and around the world. It can be to protect the “institution”. Or it can be vicious tribalism. I feel sympathy for people in this country who say they lost their faith in God because of the actions of the Irish Catholic Church. Sympathy, but also a degree of puzzlement. Because they were human actions. Nothing to do with God. Religion only proves what we know already: that people can be great or awful.

Organised religions have been important for bonding communities, but if God does exist, they seem to be just about the worst way possible to connect with that deity. Religions are essentially bureaucracies, forms of quasi-government that seek to deny the essential messiness of the universe. Religions are predicated on rules and control, often deploying Yes Minister-style sophistry or meaningless jargon to justify themselves, while attempting to project an awe-inspiring image through rituals and robes that are often rather camp.

But the world God may or may not have created is dirty, flawed and chaotic, filled with people who lie or get scared or go messing about with girls. If there is a chance of finding God, perhaps it’s better to look down rather than up.