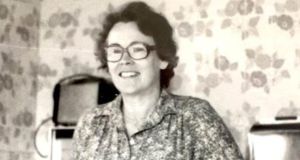 May Drea “adored small children and would get down on the floor to play with them”.

May (Mary) Drea spent a happy childhood in Johnstown, Co Meath, one of eight children born to John and Elizabeth O’Brien. She developed a deep affection for the rural way of life that never left her, even in the 1960s and 1970s, when she lived in Dublin. She persuaded husband Martin to move back to Johnstown in the late 1970s.

As a young woman she worked for the newly opened Butlin’s holiday camp at Mosney and at Major Edward O’Kelly’s Kilcarn stud near Navan. It is why she was in the Curragh when the Kilcarn-bred Sodium won the 1966 Irish Derby.

In the mid-1960s she met Martin Drea at the Castle golf club in Dublin’s Churchtown. He was then working for the ESB in Pembroke Street.

In 1963, at the age of 33, Martin’s wife Addie died of cancer leaving four young daughters all under the age of nine.

May and Martin married in 1966 and lived at Donnybrook in Dublin. “She never really took to Dublin,” recalls Catherine. So, when the girls had finished school by the late 1970s, Martin took early retirement and they moved to Johnstown.

There May became very involved with the local community, particularly in parish life, with many trips to Lourdes, where she was a helper. She and Martin were also very active members of the Royal Tara golf club.

“She had a great group of pals she went golfing with and close friends she confided in. In her later years she read all her newspapers, especially the Meath Chronicle, from cover to cover,” says Catherine.

In 2011 Martin died but May continued visiting siblings and friends. “She also adored her garden and every winter would bring her precious begonias inside to spend winter under the bed to keep them warm,” says Catherine.

Always stylish and fashionable, she “loved clothes. Red was her favourite colour and she wore it a lot with matching lipstick.”

A year ago May was admitted to the Care Choice nursing home in Trim with dementia. This was made easier as she believed she was helping the “old people” there.

Catherine recalls how when May married their father she “became an instant mother to four girls under 12. She filled our home with everything we were missing; love, the smell of baking and a woman’s touch,” says Catherine. She was “a kind of 1960s domestic goddess”.

May made “all her own jam, marmalade, cakes and her speciality, gooey pavlova”.

She also “adored small children and would get down on the floor to play with them. She had great fun with all her nine grandchildren, especially when they were all small. She loved nothing more than trying on coats and dresses, and would get great fun out of her daughters’ and grand-daughters’ hairstyles or make-up,” says Catherine.