Sean Moncrieff: The thing about freedom is that it isn’t free

The people who rallied against lockdown, against wearing masks, don’t seem to get this 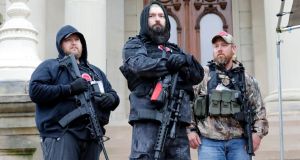 Armed protesters take part in an “American Patriot Rally”, organised by Michigan United for Liberty, demanding the reopening of business in Lansing, the capital city of the state. Photograph: Jeff Kowalsky/AFP/Getty Images

During the full lockdown in the US, various strikingly-white freedom-lovers protested for their right to infect other people.

Many of them played dress-up in GI Joe outfits, complete with working AR-15s: literally an Armalite in one ungloved hand and a ballot box in the other. But without the ballot box.

In fairness, they are not representative of all Americans. But they are the result of a founding myth that the US was built by individual rather than collective effort; it doesn’t matter where you start from, you can make it. It’s the myth that divides America; that is taught to school children, that African-Americans know isn’t true, but other poor Americans cling to, despite the evidence of their own lives.

It’s one of many reasons why the freedom-lovers didn’t like lockdown or protest against wearing face masks now. A collective effort? Everyone doing the same thing? Socialist mind control.

We love following American fashions in this country, and so developed our own strikingly-white fringe freedom movement. No guns, of course. The weapons of choice were a publicity-generating court case that didn’t get anywhere, a couple of video stunts and a few small flag-waving protests.

But their argument was the same as the Americans they mimicked; that the lockdown took away our freedom.

Freedom is a word charged with emotion, that evokes images of heroic patriots (as the US and Irish protestors claimed to be), but in practice is nothing like that. Patriots of old knew they might have to trade their lives and liberty for it; the early Christians did the same. Freedom is never free.

For instance, free speech is not absolute. In this column I could spend several paragraphs speculating about these people, about their motivations, personal and political, about who may or may not be funding them. But I don’t have the absolute right to do that because of the laws of defamation. They constrain what you or I can say publicly. That limit on one freedom is a trade-off against another: for you, me and them to protect our good names.

There are myriad other examples of this in liberal democracies. Of course, we can – and should – argue over the balances of those various rights and restrictions. And we have been living through an extreme example of that.

This has been a mass-media pandemic, where knowledge levels have grown faster than the infection itself. A bit like the economic crash, when suddenly we all knew what an unguaranteed bond was, now we’re all epidemiologists.

We know that we’ve been doing this because, if we hadn’t, it could have been so much worse. We know that epidemiology is – literally – an inexact science, so to keep ourselves and each other safe, we’ve had to exercise a super-abundance of caution.

All these steps were taken against something that is invisible to the naked eye, and that has, thanks to our collective efforts, infected less than one per cent of our population. Yet it was a trade-off that the vast majority of the Irish public was willing to make; we restricted our freedom of movement and our economic wellbeing so that others and ourselves could have the freedom to not die or be seriously ill.

This willingness demonstrated that the vast majority of Irish people are logical, responsible and decent. It also demonstrated that Irish people understand that freedom isn’t a juvenile slogan but a system of give and take that inevitably results when people live together in communities. If we aren’t willing to curtail some of our (often bogus) freedoms, then none of us are free.

Why these protestors, who also live in our communities, don’t understand this is an on-going puzzle. Perhaps they see conspiracies where others do not. Perhaps, they are, as they maintain, more patriotic and purer of purpose. Or perhaps they don’t see the difference between being free and being selfish.