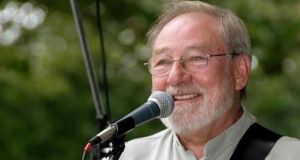 Frankie Benson was a popular figure in his adopted city of Toronto where he had been a major radio personality in the Irish community for over 40 years. He became known there as “Mr Belfast”. Born in that city’s Antrim Road on July 4th, 1942, he died on May 12th at Toronto’s Etobicoke General Hospital due to coronavirus complications.

In 1966, aged 24, he boarded the Soviet liner Alexander Pushkin in London on its journey from Leningrad (St Petersburg) to Montreal in Canada, bringing with him a guitar and a fishing rod. On board he won a singing competition, indicating his life to come.

In Canada he became involved with Toronto Irish folk band The Molly McGuires. They were at the height of their popularity from the late 1960s to the late 1970s, a time when Irish immigration to Toronto was high. They played Carnegie Hall, New York, recorded albums and performed on many popular Canadian television programmes. Frankie was a balladeer with the group and when they wanted to slow things down he sang Danny Boy, Carrickfergus or The Isle of Innisfree.

In the late 1970s, he became involved with radio in Toronto and his fame in southern Ontario grew due to his two-hour weekly programme the Radio Erin Show, broadcast on the CJMR and CHWO radio stations. It involved two hours of Irish music, news from Ireland, GAA results and analysis, and details of community events happening in Toronto and southern Ontario.

The programme ran until 2018 and it is no exaggeration to say that Frankie became probably the most famous personality in Toronto’s Irish community.

When he left Belfast it was before the Troubles began and so he retained many fond memories of Ireland and Belfast where, as he grew up, there were better cross-community relations and that was his experience. It was, perhaps, due to this formative influence he could move easily in both of Toronto’s Irish communities.

He was loved by his children Laura and Colin, grand-daughters Kealey and Scarlet, and by his brothers and sisters in Ireland and Canada. His wife Anne predeceased him.