‘We give our children everything they ask for, if that makes us bad parents – guilty as chorged’

Ross O'Carroll-Kelly: I’m not sure we’re the kind of family who likes fun 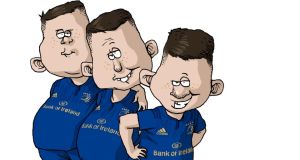 ‘God forgive me for saying this, but they’re not nice kids’

So, yeah, no, I’m enjoying some quality time with my kids – as you do. Me and Honor are watching a YouTube video of wedding day fails while Brian, Johnny and Leo are rolling around on the floor, basically killing each other.

A groom – very clearly hungover – spews his breakfast right down the front of the bride’s dress while they’re exchanging their vows and me and Honor nearly herniate ourselves laughing.

Suddenly, Sorcha walks into the room. She’s like, “Okay, everyone,” pulling the boys aport, “we’re going to do something together this morning – as a family.”

Me and Honor are both like, “Excuse me?” straight on the defensive.

She’s there, “We’re going to do a TikTok dance!”

“Exactly,” Sorcha goes. “We’re pretty much the only family I know who hasn’t done one yet? Julie from yoga did one with her daughters, Bayley and Madison, and it’s – oh my God – so cute! And I was thinking, wouldn’t it be an amazing souvenir to have of, like, the lockdown?”

“Oh my God,” Honor goes, “watch this one, Dad – the mother of the bride falls face-forward into the cake!”

I laugh. Six tiers – totally obliterated. It takes four people to pick the woman up. I’m like, “Let me see that one again, Honor.”

But Sorcha closes over the laptop and goes, “You can watch that later, Honor. Come on, everyone, we’re going to do Blinding Lights.”

I’m there, “Sorcha, I’m not sure we’re that kind of family.”

“What,” Sorcha goes, “a family who likes fun? Of course we are. Now, I’ll show you the steps. Boys, watch me,” and she storts jumping around like an aerobics teacher on coke. “You bounce on your right foot while tapping your left foot in and out. You keep the motion going and then dab with your hands while continuing to tap your left foot out. Next, you’re going to lift your hands together and –“

This happens from time to time? Sorcha gets a sudden burst of enthusiasm for something and we end up having to dampen it down.

Even that fails to put the fire out completely.

Sorcha’s there, “I just think it’d be a nice thing to have in years to come – a positive to come out of the pandemic.”

Ross O'Carroll-Kelly · ‘We give our children everything they ask for, if that makes us bad parents – guilty as chorged’

“I’m not performing some lame dance,” Honor goes, “just so you can pretend to your friends on social media that we’re this, like, cutesy family living this dream life. How old are you – ten?”

I watch Sorcha’s eyes fill up with tears. She turns on her heel and she storms out of the bedroom. A few seconds later, I hear the front door slam.

I’m there, “Honor, that was possibly a bit horsh?”

She goes, “Got the message, though, didn’t she?”

“She wants all her mates on social media to think she has this, like, perfect family – she’s so focking needy.”

There must be days when Julie sees them coming with the breakfast tray and thinks, ‘Jesus, not these two dickheads again’

“So what, Honor? Is it too much to ask to let her have her little thing? Jesus, the amount of stuff she does for us. She’s the one who’s kept the show on the road since this whole corona thing happened. Cooking meals, overseeing the home-schooling, doing the online shop, while also trying to work from home. It’s only a few dance steps, Honor.”

“Well, maybe it’s time I storted. She’s your mother, Honor. And in case you’ve missed it, she’s a pretty focking amazing person. Even though she can be annoying sometimes.”

With that, I just, like, storm out of the room as well. I tip downstairs and then outside. Sorcha is sitting on the bench halfway down the gorden, staring out at the sea. I sit down beside her. I don’t say anything. I just put my orm around her.

This is the Rossmeister that my critics never get to see.

She doesn’t look at me. She just goes, “Are we bad parents, Ross?”

I’m there, “We give our children literally everything they ever ask for. If that makes us bad parents, then we’re guilty as chorged.”

“God forgive me for saying this, Ross, but they’re not nice kids.”

“I know that – but they’re not finished yet. They’re, like, a work in progress. Who knows how they’ll turn out.”

“Have a look at Julie from yoga’s Instagram. Bayley and Madison have brought her breakfast in bed every single day during the lockdown.”

“They’re not dorks. They’re beautiful little girls who have an amazing, amazing relationship with their mother.”

“You think it’s like that all the time? Trust me, there must be days when Julie sees them coming with the breakfast tray and thinks, ‘Jesus, not these two dickheads again’.”

“Do you really mean that?”

“Sorcha, it’s Instagram. It’s people showing you the very best version of their lives. Sorry for being deep, but it’s not reality – as in, it’s not actual?”

She doesn’t say anything for ages. Eventually, she goes, “I don’t know if it’s, like, cabin fever – or if it’s just everything that’s going on in the news right now – but I’ve storted to wonder did we do the wrong thing bringing children into this world?”

“Hey, that’s port of what it is to be a parent, Sorcha. To always be asking yourself that question. Again – deep.”

All of a sudden, her phone beeps. She stares at it for a few seconds, then she goes, “It’s from Honor. It’s a video.”

We sit and we watch it together. The girl is standing in a line with her three brothers and they’re singing, “So long, farewell, Auf Wiedersehen, goodnight,” with all the waves and the bows and the twirls in the right places.

Sorcha puts her hand over her mouth. “Oh my God,” she goes, because The Sound of Music is literally her favourite movie.

“I hate to go,” they sing, in perfect harmony, “and leave this pretty sight…”

I feel a tear slip from my eye, just as I watch one slip from hers, because the question of whether we did the right thing has been well and truly answered. For today.