Make up is as trivial as male pursuits like football but which one is taken more seriously?

Laura Kennedy: I’m uncomfortable about Kylie Jenner’s success and the homogeneity of the ‘Instagram face’ 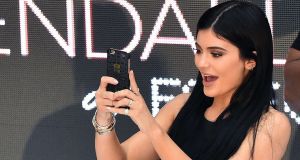 Last week, Forbes named Kylie Jenner as the youngest self-made billionaire ever. When I saw that headline, I sat at my desk for a couple of minutes experiencing a number of thoughts and, strangely, emotions, while thinking about how fundamentally the world has changed in such a short time. The headline made me uncomfortable, and it took a bit of consideration to winkle out exactly why that is.

In a world where women’s interest in cosmetics is ridiculed (and it is) as trivial, I wanted to feel positively disposed toward the idea of a very young woman making a billion dollars from her make up business. I wanted to feel this way especially since, as a beauty writer, I make a living in part writing about products made by companies like Jenner’s, and about the industry she is a part of and contributes to.

“Self-made” is a term that does not seem to apply comfortably to the twenty-one year old, who owns all of her own company, estimated by Forbes to be worth $900 million. Anyone who has worked within the beauty industry understands the exorbitant costs of starting a brand, and the struggle to find investors and funding in order to realise a finished product.

Jenner started the brand in 2015, and is now, four years later, a billionaire. Her achievement is extraordinarily impressive, but I remain uncomfortable. What we spend our money on dictates what we value, and Kylie Jenner’s cosmetics brand, whose products are far from the best quality or most innovative on the market, is very valuable indeed.

Despite this, women’s interests are consistently dismissed as trivial. This was highlighted most recently when Stacey Dooley, the BBC documentary maker, recently defended her love of make up, and her choice to appear as a contestant on BBC’s Strictly Come Dancing in the face of criticism that she had gone from making serious documentaries to trivialities. As a person with more than one interest, Dooley wants to do both.

Let us clarify from that make up is trivial. It is a trivial interest which fuels a multi-billion dollar industry which translates into countless jobs and real global impact. It is also increasingly becoming a vehicle through which intelligent, business-savvy women can gain enormous independent wealth.

Make up is equally as trivial as traditionally male pursuits which don’t qualify as intellectual, like football. The problem is that women’s intellectual capacity is often judged by their trivial interests rather than their intellectual ones, and with men this tends to work the other way around; both men and women are guilty of making this sort of judgement.

When I was a student, a female philosopher witheringly told me (while staring at my red lipstick) that she didn’t have time for makeup (presumably with all of that important research she was doing) and wanted to be seen as an intellectual, anyway.

Meanwhile, she had no issue with the men around us talking about their fun but unserious hobbies which evidently gave them joy and were valuable for that reason. Seriousness is not the metric by which we should judge such things. Having “trivial” interests is part of being a rounded, healthy individual, and to be encouraged.

Her cosmetics, first made famous by the matte liquid lipsticks Jenner regularly wears on lips that only thousands of dollars in injectables can buy, are selling an idea as much as an unattainable aesthetic.

The conflict I experienced while reading about Jenner’s formerly online-only cosmetics brand – Kylie Cosmetics – making $54.5 million in the six weeks following its entry into Ulta, a chain of cosmetics stores across the US, was not about cosmetics.

It is a reflection on our culture as a whole that Jenner, whose face is one of the most famous on the globe, is a person who so many want to emulate. Her cosmetics, first made famous by the matte liquid lipsticks Jenner regularly wears on lips that only thousands of dollars in injectables can buy, are selling an idea as much as an unattainable aesthetic.

It doesn’t seem clear that Jenner’s brand represents very much at all apart from one thing – the homogeneity of the “Instagram face”. This cosmetically reconstructed look it sells to a generation of young women who want to look like Kylie, and not like themselves, forgetting in the process that even Kylie doesn’t look like herself.

There is nothing wrong with buying Jenner’s products – it is the tremendous value placed on her appearance, and the products as a means of emulating it, which is a touch unsettling.

Food and drink quiz: Who is the only chef to be sued by a sitting US president?
6