Life lessons from the garden: The joy of nurturing fragile things

Laura Kennedy: ‘My mother taught me that if a plant wants to flower, it will when the time is right’ 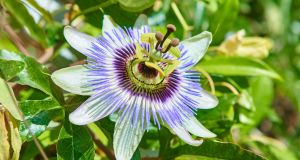 ‘The passion flowers that looked so alien and beautiful; a rumour of a far-off place creeping up a trellis in Limerick’ Photograph: istock

Thinking back, I remember the fragrance above all. A damp, peaty redolence. My mother saw something I didn’t see, back then. Of course, as you generally will when you are young, I presumed this was an error on her part rather than on mine. She would amble reverently through the plants, something radiating from her which I took for granted and didn’t understand at the time.

At home, she was so often stiff; her face tight as though bracing for an impact. In the midst of the plants, her whole person relaxed. She was quiet, speaking only to point out something beautiful, or to share information with me – that I didn’t appreciate – about some plant or other as I plodded behind her. I was well into childhood before we first went to a garden centre, because my mother didn’t have a car until I was 10 or 11. When she finally got one, it was a regular weekend trip. It was called McLysaght’s, and is still there in Limerick as far as I know, though the name might have changed.

The worst trips were the ones during winter and early spring when the entire place would be a flat landscape of greens. As a child, the only plants I had any time for were the ones that gave it all away up front – the blowsy flowers that would lean in at you leerily as you walked by, heavy under their own weight. In the summer, the place would be in constant motion with dancing flowers – clematis, roses, the passion flowers that looked so alien and beautiful; a rumour of a far-off place creeping up a trellis in Limerick. During the winter though, everything felt dormant, and I didn’t have the patience or follow-through to appreciate sleeping plants for their potential. I did not understand that the payoff is greater when you nurture something small over time.

My mother would try to tell me. “If you care for them well, and put them somewhere they can thrive, they’ll reward you. Nothing will happen for a while, but the plant wants to flower, and it will when the time is right.”

In my early 20s, I began to understand what drew my mother to her plants

She tried to impart her appreciation for the infinite shades of green – like sun shimmering through murky water. The miraculous variety in types, in the shapes of leaves and their mysterious function. One leaf is a complex system, as beautiful and varied as malachite, as alive as I am. I didn’t see it. Children are not known for their patience.

My mother’s garden was the envy of the neighbourhood. Each year, it would explode like a ravenous beast freed from a cage. Beds she dug would thrash with nasturtiums, their little flower faces nodding in pacifying agreement even as their stems trailed menacingly toward the house, threatening to take over everything. At my request, my mother bought a passion flower – I was drawn to it with unusual enthusiasm – and through my teens I watched it creep up and eventually swallow the arch my father had built from pine and chicken wire years before. It became an enormous, independent entity. The flowers would burst forth every summer, majestic and exotic, confusing delighted insects who came to land on them as though they, too, didn’t expect to find such a botanical marvel in a Limerick suburb.

In my early 20s, I began to understand what drew my mother to her plants. I grew potatoes in buckets and strawberries on window sills. I collected the seeds from her nasturtiums at the end of every summer, and put them in envelopes to be planted the following year. Her garden is gone, now, and so is she. I lost my connection to growing things when she died.

Like those desiccated seeds rattling around in their envelope, though, I needed time and the right conditions. This year, slowly, I have observed myself filling our apartment with plants, tending them carefully, almost unthinkingly, lost in the small, miraculous work of cultivating living beings. I marvel as they grow, as they awake and lean into the spring with an enthusiasm that I lost when I lost my mother. It was only dormant. Thankfully, she taught me how to nurture fragile things.