‘Last time I cried? When I got the bill from The Merrion’

In Conversation: Entrepreneur David McCourt lives in The Merrion Hotel in Dublin, where Peter McCann is the general manager 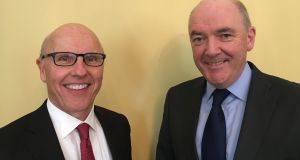 David: When I got the bill from The Merrion.

Peter: When he paid it.

David: Coco Chanel lived at The Ritz for 37 years. Bob Dylan lived at the Chelsea Hotel for ten years. Ernest Hemingway lived at Ambos Mundos in Cuba for years. Oscar Wilde lived at L’Hotel in Paris. Richard Harris lived in The Savoy. They are very fertile, creative places. Living at a hotel offers some sort of exposure to creative juices you wouldn’t get normally somewhere else.

What is your death row meal?

David: Pasta. Amatriciana, only made in Rome in the right way, with a Guinness.

Peter: Waterville, Co Kerry. I grew up there as a kid on holidays.

David: Do you still go down there?

Peter: Yeah. I’ll go down there the first week in August, and then back down in October.

Peter: I’m not hung up on clothes at all. Maybe my woodturning jacket. I wear suits all the time, so I like to dress down. I’m particularly interested in woodturning and carpentry.

David: I wore a suit every day for 30 years. The same guy made my suits and he put a number inside them so I would know every year which one to cycle out. Different shades of navy blue all day, every day. If I don’t have jeans on, it means I’m looking for money.

What is your favourite piece of technology that is not a computer or a phone?

David: There’s a thing on the wall of my apartment in London. It can do everything. St Regis Hotel in New York has it. You can do the music, the lights, the TV.

Peter: Can you fix it when it breaks?

Peter: It’s not that good then.

David: It’s brilliant! The company that makes it is called Crestron.

Peter: I’m not a big lover of technology, but I have Google Home in my office. But the opportunity to think is being diminished by machines.

What do you wish you studied more in school?

Peter: Academia and I didn’t really hit it off.

Peter: I’m an everything guy, but my go-to is champagne. You drink very little. A really good quality whiskey?

David: Guinness. I’ve never had a Guinness in America, but in this country I will.

Peter: I’ve never had a Starbucks in Ireland. Everything has a place.

What’s the worst piece of advice you’ve ever received?

David: An investment banker from Goldman Sachs. We sold 20 per cent of a company for a couple billion dollars. I wanted to sell the whole thing. He said “no, no, no. We’ll wait. Next year we’ll sell the rest of it for twice as much.” Then the company went to zero. Worst advice. He gave it to me standing outside Bravo Gianni’s restaurant on East 63rd Street between First and Second Avenue, December 1999. I remember it like it was yesterday. In New York Magazine in 2000 they listed the best and worst deals of all time, and we were first in both.

Peter: Bad advice put me in a place where I needed to get out and not make the same mistake again. So was it really bad advice? It taught me something.

Is there any part of the world you haven’t been to yet that you’d really like to go to?

Peter: I’m going to China for the first time ever this year, and I’m excited about that.

David: I want to go as far north as I can go and see the Northern Lights, which I’ve never seen.

Peter: Northern Sweden is the best place I think.

Peter: Would you go back to the restaurant where you got the bad advice?

Is there any motto or mantra you think of when things are getting tough?

David: My father said to me once: “you’re talking to the wrong guy”. What he was basically telling me was to stop complaining and get on with it. Sometimes if you have a tough problem to solve, if you’re not careful, people tend to talk about how tough the problem is instead of getting on with it.

Peter: A great variation of that is “you’re obviously confusing me with someone who gives a shit”.

David: Exactly! That’s what my brother says all the time. Same thing.

Peter: I totally subscribe to that. If you have a problem, you can’t walk away from it, you have to deal with it.

Peter: Something like a horse. Reliable and strong and doesn’t let you down.

David: I’m not sure about those horses never letting you down. I’ve a couple of horses.

Peter: I’m thinking of a workhorse, not a racehorse!

David McCourt is an entrepreneur whose new book Total ReThink: Why entrepreneurs should act like revolutionaries is out now. Peter McCann is the manager of the Merrion Hotel, where McCourt lives.

‘The virus will be back’: Preparing for the second wave of Covid-19
9