Ross O’Carroll-Kelly: So I’m lying on the floor in Bilbao airport – in shock 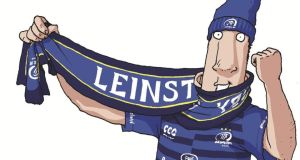 I’m lying on the floor in Bilbao airport, just a few feet from our deporture gate, breathing into an empty Doritos bag – Tangy Cheese and Tabasco. I push it away from my mouth and I go, “Show me the text message again”.

“Well, I’m not going to take that risk. We’re boarding in 10 minutes. And JP and Oisinn will be here any minute with the pints.”

“I’m not giving you your phone.”

One of the Aer Lingus staff tips over to where I’m lying with the goys kneeling beside me. “He won’t be allowed on the flight,” the woman goes. “Not in that condition.”

“He got a text message from Johnny Sexton. ”

Fionn’s there, “You read it once and you fainted.”

“And your legs went from under you.”

“Yeah, bear in mind, I haven’t been to bed since the match yesterday?”

The woman goes, “Well, you can’t lie there. We’re going to be boarding soon and you’re causing an obstruction.”

So Fionn and Christian help me to my feet and we move over to the, I don’t know, general seating area? I’m there, “Okay, Fionn, if you won’t give me my phone, why don’t you just read the message to me?”

Him and Christian exchange a look. Christian just nods, then Fionn goes, “Okay – as long as you keep breathing into the crisp packet.”

Which is what I end up doing?

He takes out my phone and he calls up the message. He’s like, “Hey, Ross, it’s Johnny.”

I’m like, “Read it slower. Jesus, you’re racing through it there. I want the words to hopefully sink in this time.”

He rolls his eyes – obviously jealous.

He goes, “Hey, Ross, it’s Johnny. I just wanted to say thanks for the text before the match yesterday.”

I’m like, “ ‘Eat thunder, shit lightning.’ I thought I’d put a new spin on the usual matchday message. Keep it fresh for him.”

“Do you want me to read this or not?”

“Your support has been so important to me, not just on days like yesterday, but throughout my rugby career. There have been so many times when your words of advice or encouragement have been the main difference between winning and losing.”

“That’s so like him. Three Six Nations Championships, two Grand Slams and now four European Cups and he’s trying to pass the credit off onto other people. Hey, if it’s going, I’ll take it.”

Fionn goes, “I’ve always regarded you as basically a mentor–.”

“...and I really appreciate your generosity in sharing your wisdom with me so that I could avoid making the same mistakes as you did in your career.”

“I showed them all how not to live your life if you want to be a professional rugby player. This is recognition – at long last.”

“Anyway, I hope you enjoyed the match. No doubt there’ll be a few notes made in your famous Rugby Tactics Book. I’d love to look at it sometime.”

Fionn puts my phone back into his pocket.

“Class act,” I go. “Unbelievable. I genuinely don’t know if I’m well enough to fly after that.”

A second or two later, Oisinn and JP arrive over with the pints. “We’re going to be boarding in a few minutes,” Oisinn goes. “Better knock them back. What’s wrong with you, Ross? Why are you breathing into a Doritos bag?”

“He got a text message,” Christian goes, “from Johnny Sexton, thanking him for the part he played in beating Racing yesterday.”

“It was more than that,” I go. “He was basically saying that I’m Leinster and Ireland’s unsung hero. That’s what I took from it anyway.”

JP laughs. I’ve got a group of friends who’ve always tried to keep me grounded. I wish they’d focking stop.

“How do you know it was Johnny Sexton?” he goes. “It might have been someone pretending to be him?”

I’m there, “Er, because his name came up on my screen? You see, unlike you, JP, I actually have his number in my contacts. Because I decided when I didn’t become the player a lot of people expected me to be, I owed it to the game of rugby to be a mentor – his word, not mine! – to the younger generation of players coming through. And you’re jealous of that, Dude, because it’s finally been publicly acknowledged. And all you can do is sneer. Which is understandable. Because you’re a loser – a big loser!”

He goes, “Ross, I got into your contacts when you were in the jacks this morning and I changed my name to ‘Johnny Sexton’.”

“I sent you that text, Ross – a few minutes ago, when me and Oisinn were at the bor.”

“Yeah, no, I thought you’d find it funny. I’ve always considered you a mentor. I really appreciate your generosity in sharing your wisdom with me so that I could avoid making the same mistakes as you did in your career.”

He laughs. They all laugh?

Christian goes, “I think he’s about to have another turn. Goys, we’re going to need a bigger crisp packet.”