What could Meghan and Harry do on their mini-moon trip to Ireland? 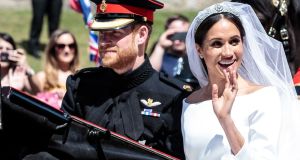 Prince Harry, Duke of Sussex and the Duchess of Sussex Meghan Markle ride in the Ascot Landau carriage after getting married at St George’s Chapel, Windsor Castle on May 19th, 2018. Photograph: Jack Taylor/Getty Images

The honeymoon of the most talked about couple in the world is being postponed due to work commitments, but Meghan Markle and Prince Harry are due to make a pitstop in Ireland this summer. The pair have reportedly decided on a one-night mini-moon to Ireland in July before travelling on to more exotic destinations.

It looks as though the couple have realised what many celebrities have before them – it’s possible to have the best time in Ireland, if you know where to look. And if you take the lead of the A-list, plenty of fun, from the romantic to the random, can be packed into 24 hours.

1 Get coffee in Blackrock like Ryan Reynolds
Late last year, Ryan Reynolds and his wife Blake Lively set up shop in the picturesque fishing village of Dalkey while Lively filmed her part in The Rhythm Section. According to one report, they even set up a trampoline in the garden for their daughter James, who was 2 at the time. And when off-duty, the couple grabbed a coffee at Blackrock’s Bear Market.

2 Take in a rugby match, like Chloe Grace Moretz and Brooklyn Beckham
Much like Blake, Chloe was in town to film scenes for Neil Jordan’s new film, The Widow. But when she took her then-boyfriend Brooklyn Beckham to the Aviva Stadium for a rugby match, she went rather festive in the stands with what appeared to be a warming Irish coffee. It wasn’t just sitting in the freezing cold to look at some rugby, either: the two also took a trip to the Guinness Storehouse and visited a haunted house.

3 Go to Beshoff’s, like Leonard Cohen
The late, great Leonard Cohen regularly played in Ireland, but he was also a very low-key visitor down the years. Tales abound of secret visits to the countryside, but back in 2012, he reportedly made a trip to Beshoff’s for the finest fish and chips that the city has to offer.

4 Cycle the Phoenix Park, like Beyoncé
Time and time again Beyoncé has mentioned that her sunny visit to the Dublin 8 park was the highlight of her 2009 trip to Ireland: “I was able to get around the city better because by the time anybody noticed me, I was gone,” she is quoted as saying. “People just said ‘hello’ and gave me peace and I just felt so free - it was one of the best memories of my life being able to ride around Ireland.”

5 Go to the cinema in Tullamore like Kim Kardashian & Kanye West
Honeymooners Kim and Kanye didn’t do things by the book, and their honeymoon in 2014 took them to Kerry, Cork, Portlaoise, Limerick and Tullamore. Evidently on the hunt for some privacy, and possibly taking a leaf out of Michael Jackson’s book, the Kardashian-Wests decamped to the cinema, and are said to have watched X-Men: Days of Future Past in Portlaoise. Given that it was a Wednesday, they also reportedly got their tickets for the bargain price of €6 each. Who said there aren’t bargains to be had for tourists?

6 See Fungi the dolphin in Dingle (with a pit stop in Limerick), like Johnny Depp
He may have no love for Limerick (he described the place as “Stab City” last year, prompting accusations of libel from Willie O’Dea), but the Kingdom appears to have a place in Depp’s affections. In the foreword to a book about Gerry Conlon entitled In The Name Of The Son, Depp recalls a drunken road trip the pair took from Dublin to Kerry in 1991.

“Gerry decided that we must go to Dingle to see Fungi, the dolphin. Gerry had no need to convince me, of course I was going to say yes. Who wouldn’t you want to go to a place called Dingle to see a dolphin named Fungi,” Depp wrote. Conlon and Depp stopped off in Limerick on their way to Dingle and the Hollywood star revealed how things got a little bit out of hand.

“Our brief pit stop in Limerick proved to be one of the most chaotic nights that I can ever remember,” Depp wrote.

7 Go on the pints in Dublin like Emily Ratajkowski
In 2016, Twitter went into meltdown with the news that Emily Ratajkowski had dropped into Doheny & Nesbitts on Baggot Street for a surreptitious session. It turns out that the stunning actress, whose full name is Emily O’Hara Ratajkowski, has family in Bantry. “I absolutely love Ireland,” she told the Sunday Independent. “It’s one of the most beautiful places on earth and I have strong ties here. Both my grandmothers are from Ireland and I have spent every summer in Bantry since my father, who is an artist, had the romantic idea 20 years ago to buy an old farmhouse on the west coast and renovate it.”

If Harry and Meghan are looking for a night spot that gets the A-list’s nod of approval, they could always try O’Donoghue’s across the road, where Rihanna and Justin Bieber have (separately) raved about the pints.

8 Go walkabout like Josh Hartnett
When his partner Tamsin Edgerton spent the summer of 2013 working on the adaptation of Cecelia Ahern’s Love, Rosie, Josh Hartnett was a regular sight (for sore eyes) on the streets of Dublin. He, too, was working in the capital, filming the Sky One series Penny Dreadful, and the couple explored Ireland together from their base at the Shelbourne Hotel.

9 Eat kidneys like Mel Gibson
In 2016, Mel Gibson enjoyed an extended holiday in the capital, and at FX Buckleys on Pembroke Street, the star was reported to have ordered kidneys and a medium rare fillet. The restaurant’s sommelier, Albert, told the Irish Mirror: “He wasn’t here for very long. He and the woman he was with - I think it was his girlfriend (Rosalind Ross) - only had one course each. But he was really nice and complimentary of the kidneys!” He was also spotted eating healthy snacks at Yogism and drinking a pint in The Long Hall on Georges Street.

10 Go bowling like Bruce Springsteen
After a barnstorming gig at Croke Park, Brice Springsteen took a curious detour in 2016 to the Leisureplex in Stillorgan, Dublin. By all accounts the star rented out the centre, likely in a bid for some ‘team building’ with his touring crew.

Pavlovas with summer berries: The perfect finish to any meal
6