Prince Harry is an Irishman trapped in a royal body

Paddy Logue: Like Obama, Ali and probably Putin, Harry is almost certain to have some Irish blood 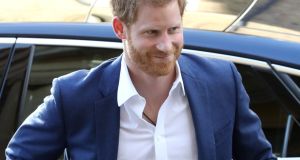 “You can imagine Harry Windsor sailing a currach as easily as seeing him being dragged along in a gold-encrusted carriage. Let’s face it, he is our prince. Prince Harry is one of us.” Photograph: Chris Jackson/Getty Images

There’s a debate raging in our family WhatsApp group about the British royal family since last week’s “disgusting spectacle”, as one of the group dubbed it. “They’re like a drunken stag party rowing in Temple Bar, ” another pitches in, “you can’t look away, can you?” The other side “feels sorry for them” that they find themselves born into a life of such scrutiny.

“Yeah but at least they’re dysfunctional and rich,” reads the notification on my phone within seconds. Which kind of hurts. Somebody leaves the group in disgust. They’ll be back. They are just like the rest of us – they can’t stop talking about the British royal family.

And we are probably no different than lots of people. Ireland’s obsession with the royals is a long-standing affair. In 1900, on the visit of Queen Victoria, a poem was published in The Irish Times (which admittedly was not a rebel publication at the time) welcoming the “Gracious Sovereign”.

“Irish hearts are loyal, Irish love is keen,” it tells readers. “More loving people you can never know, Than your Irish subjects, This they plainly show.”

It hasn’t been all plain sailing since then, of course, but we have sort of grown to love them in some ways. The reasons for disliking them are pretty well-documented, but just why have we come to love them so much?

1. For starters who else would we laugh and sneer at?

They are England’s France, Louth’s Meath, Dublin’s Cork. We are a people who see piss-taking as a national sport, no, duty, and they are ripe for the picking. Wudja look at the state of those royals, leeches on society? The size of yer man’s ears and the Greek, did you hear what he’s after saying to the native American tech entrepreneur? We are on the edge of our seats just waiting for the next indiscretion. It makes us feel better about ourselves; Dev was right, Ireland is a morally superior people, just look at the heathens across the pond. Oh, and pass the popcorn.

2. We would dearly love a monarchy of our own but we would never be able to get it together.

How would we pick them? It would go one of a number of ways. Given the huge amount of tourism revenue at stake, the contract for Ireland’s royal family would be put out to tender in a process taking many decades, and many, many expert consultants. Alternatively, a family known to the newly-established Department of Monarchy would be granted the contract by means of a nod and wink on a 99-year rolling basis with a fee review every six months. The Brits, on the other hand, give us a monarchy we can play with and it doesn’t cost us a red cent.

3 Who else can we dream about being or being married to?

Does Ireland have a fairy princess or knight in shining armour of its own for her people to dream about? Bono? The Lord Mayor of Galway or Patsy Dan, the King of Tory Island? They are grand, like, but they aren’t really going to cut it on the dream front.

4. The royals remind us that we are in fact not English or nothing like them and they are the embodiment of everything we like to think we aren’t. It’s a little-known fact that the Irish for Irish, translated literally, is “definitely not English, *spit*” . They’re posh, we are agricultural. We speak English, but it’s Irish English, not English English and we may even throw in a cúpla focail for a State occasion or to talk about the Sassenach behind their cursed English backs. They are rich and we are eternally impoverished; they are staid and boring, we are gas craic; they are masters of all they view, we are more at home selling a low-loader full of scrap metal to a man from Kinnegad. We like to be victimised rather than to rule and we are not picky – Britain, Europe, the Troika, the Church or the guys who invented the game Fortnight.

5. They are just celebrities after all and let he who has not picked up OK! Magazine in the dentists cast the first stone. We can pry into their lives unchecked and pass judgement with absolutely no negative impact on our conscience. We get to look at them and wonder things like – how much cash do they carry around in their wallets? Do they have wallets? If they do have wallets, who bought them or are the rumours true they are made out of the oak-smoked scalps of ancient Irish warriors captured during the battle of Baile na Hulicháin? Do they watch Gogglebox?

6. But the biggest reason we really, deep, deep down – if we asked ourselves the hard question as to why we really do love the royals– is Prince Harry, Prionsa Anraí. He is after all an Irishman trapped in a British royal family’s body. Just like Barack Obama, Muhammad Ali and probably Vladimir Putin, Jamie Oliver, Ed Sheeran, and Elvis Presley, Harry is almost certain to have some Irish blood in him. Just look at him. You can imagine Harry Windsor sailing a currach as easily as seeing him being dragged along in a gold-encrusted carriage. Let’s face it, he is our prince. Prince Harry is one of us.