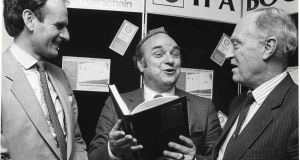 The run-up to Christmas is an appropriate time to write of James (Jim) O’Donnell, who died in October, just 16 days before what would have been his 84th birthday. On many Irish people’s Christmas present list for over 50 years has been the annual Diary and Yearbook of the Institute of Public Administration (IPA), which he established in 1966 (the first edition being for 1967), and which is widely regarded today as an essential, if not at least a highly desirable source of information for busy and senior people in business, the public service, the professions, and, of course, journalism.

Annual sales now approach 10,000, but it is a sign of the nation’s progress since its first issue that then the print run was just for a few hundred copies; anything more was regarded then as bordering on the irresponsible in terms of public expenditure.

O’Donnell was a central figure in the IPA thereafter as its Director of Publications, helping to build in a creative way on the early work of figures such as TJ Barrington and Des Roche, who had set up the institute in the 1950s to help professionalise a perhaps moribund civil service and make it fit for purpose in an Ireland on the cusp, then, of very radical change.

Dr Maurice Manning, Chancellor of the National University of Ireland (NUI), and by profession an academic political scientist, who spent over 20 years working with O’Donnell on the IPA’s Publications Committee desctribed O’Donnell as “a very good, innovative publisher…he saw the need to provide proper texts for the civil service, and in the 1970s and 1980s brought in people from the outside [of the public service]” to provide them.

O’Donnell, says Manning, was “warm, charming and bubbling with ideas. He greatly expanded the list of the institute’s publications, [both textbooks and regular journals], and a great many have lasted.” Today, this might seem routine, but in the 1960s there was a “great deal of secretiveness in the civil service, and Jim wanted to make it more open.”

O’Donnell was conscious that, despite its limitations, there “was a great reservoir of talent” in the civil service and that, if that knowledge was not made available in publications, it “would die with that generation.”

Perhaps typical of his innovativeness in using the best of the old with the best of the new, was O’Donnell’s bringing in the late Professor Ronan Fanning of UCD to write the history of the Department of Finance, which, notes Dr Manning, “would have been unthinkable in the 1950s” with its then hidebound traditions of secrecy.

O’Donnell was an author himself, writing especially for the layperson in what the IPA’s present Director of Publishing, Richard Boyle, described to The Irish Times as “language applicable to a wide audience…with a very informative, discursive style,” always accompanied “by good humour all along.”

O’Donnell’s books included a manual for Civics classes entitled How Ireland is Governed, and Taxation Fair and Simple, and, in the 1990s, Wordgloss, a kind of dictionary, highly useful especially for journalists, politicians and civil servants, explaining the true origins and thus the true meanings of words in common usage. A second, expanded edition appeared in 2005.

O’Donnell clearly had an eye for even the youngest of talents, hiring then unheard-of young journalists Christina Murphy and Terry Prone, as, respectively, the first and a later editor of one of his most successful ventures at the IPA, Young Citizen magazine. The late Ms Murphy went on became a renowned Education Correspondent with this newspaper, and Ms Prone is today one of this country’s leading experts on media.

Late in his career, O’Donnell played important and significant roles as, firstly, Secretary of the Constitutional Review Group, chaired by Ken Whittaker, which reported in 1996, and thereafter in the same role with the Oireachtas All-Party Committee on the Constitution.

A member of the Whittaker Committee, speaking on condition of anonymity, had the opportunity of closely observing O’Donnell’s input, which, she told The Irish Times, resulted in “a very capable partnership between himself and Whittaker, as both were very aware of how Government operated. Ken would have relied on Jim, who really rubbed everybody up the right way…he did it in a highly intelligent way, and caught the nuances. He was very easy to work with, very understated. His abilities were very formidable.”

A native of Navan, Co Meath, O’Donnell was one of five children of James O’Donnell snr, and Brigid O’Donnell, nee Smyth. His father was a bakery manager, and his mother ran her own grocery business. His love of words was fostered by a degree in Ancient Classics at St Patrick’s College, Maynooth, where he had gone to study for the priesthood on leaving St Finian’s College, Mullingar. He took his degree, but forsook his religious vocation for teaching at St Joseph’s College, Garbally, from where he made his way after some years to the IPA in 1962, where his scholarly nature, combined with a practical bent found fertile ground together.

Jim O’Donnell is survived by his widow, Mary, nee Costigan, an educational guidance counsellor and writer on education with The Irish Independent for many years, and his daughters Jane, Rebecca and Sarah. His brothers , Michael, Eddie and Aiden, and his sister, Marie, predeceased him.