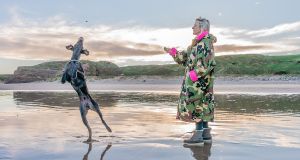 To paraphrase George Orwell, we are all equal, but some of us are more equal than others – not least, it would seem, when it comes to sea swimming. The new national sport has been sweeping the Irish coastline since lockdown began and has never been more in evidence than during this crisp Covid November.

Flicking through my phone the other day, I stopped at an image a friend had recently posted of sunrise on Portmarnock Strand in north Co Dublin. In a psychedelic winter sky, streaked pink and purple and flaming orange, Jupiter and a pale crescent moon hung like overhead lights that someone had forgotten to switch off.

And below the shimmering heavens were a whole battalion of hardy, rubber-hatted, goose-pimpled souls, all taking an early morning dip in a still, yellow sea.

It was a beautiful, if oddly surreal, snap, and one that has surely been replicated all along the coast during lockdown as more and more people swap their morning commute for a plunge into the brine. The image, however, omits an ugly truth about sea swimming. It fails to speak of a silent but vicious watery war raging on our shores between the haves and the have-nots.

I’m not talking about access to the coast (although that’s a whole other story, one that’s reshaping Dublin’s southside/northside divide into an eastside/westside schism). No, the battleground I’m referring to is squarely rooted in the preponderance of Dryrobes littering our beaches. These outdoor accessories have become an unlikely, if disputed, status symbol.

A covetable wardrobe item for the newly converted year-round swimmer, the Dryrobe is a garment that has also found a fervent fan base among those who rarely do more than think about popping a manicured toe into the drink.

“Oh, for crying out loud, what’s she prattling on about now?” I hear you roar over your lukewarm Complan.

Dryrobes, mate, I’m talking about Dryrobes. For those of you yet to encounter the all-encompassing garment, it’s a big loose coat, fleece-lined on one side and waterproofed on the other, an expensive kind of human tea cosy, retailing at about €170.

Multifunctional, the robe can be used as a modesty tent for when you’re unpeeling your salty Speedos or, indeed, it can protect you from a mildly irritating breeze when, feet firmly planted on dry land, you’re queueing up for your decaf skinny latte with your Labradoodle on an extendable leash and your telephone soldered to your pert little ear.

It is often used on film sets to keep actors incubated, and athletes, too, use them to keep their valuable limbs from cramping up. Now, like a virus all of its own, the Dryrobe has crept into our everyday lives.

I don’t know exactly when the robes started breeding like rabbits in seaside towns, but, come Covid, they quickly migrated to the outdoor terraces of south Dublin cafes, where they were often spotted on the hairy backs of mansplayers with faded tans who, to be fair, had probably just crawled out of the Forty Foot.

I want to wear one to the supermarket with my sunglasses on top of my head; or in bed, eating boiled eggs with my bedsocks on

The craze quickly spread around the coast, the Dryrobes changing their livery from a modest all-over navy blue to a gung-ho camouflage version which comes replete with a shocking pink fleece lining. (I yearn for one of those babies like a hungry dog for a frisky bitch.)

Where was I? Oh yeah, such was the proliferation of Dryrobes that a sort of class war began to fester. This was clearly evident in a sign recently erected at a south Dublin swimming spot, which reads: “By Order – No Dryrobes or Dryrobe types!!!” It’s interesting that a garment designed to cover up shivering nakedness should become quite so exposing of inverted snobbery.

I must admit that, although I’d rather slather myself in taco sauce and roll in the cat lit than get into the sea in the middle of winter, I now absolutely covet a Dryrobe. I long to become a Dryrobe type, whatever that is.

I want to wear one to the supermarket with my sunglasses on top of my head; or in bed, eating boiled eggs with my bedsocks on. I want to paint my nails the same colour as the lining. I might paddle in it. I might even lend it to the sea swimmers I observe, perched in the open boots of battered hatchbacks, attempting to fight off hypothermia with an old bath towel and staring at the sea as if at a monstrous, compelling lover.