The actor on life in lockdown, upcoming projects and the difficulties of working in TV 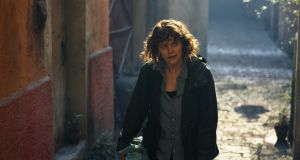 Simone Kirby has had a two-decade-long career, starring in Jimmy’s Hall, Peaky Blinders and more.

With a two-decade-long career, few female Irish actors are as prolific as Simone Kirby, who has cropped up in many a significant production, from Jimmy’s Hall to Peaky Blinders to, most recently, the current series of His Dark Materials, the BBC’s epic fantasy drama.

So pausing work for 2020 didn’t come comfortably at first. “I tried to keep myself busy – I recorded a couple of audiobooks, and I wrote more, although with my husband [actor/writer Fergal McElherron] also writing and our young son in the house, I didn’t have the headspace for much creativity,” she says, speaking over Zoom from their home in southeast London.

“But we have a garden, which a lot of people in London don’t have, and we’ve been spending time focusing on things that make us happy.”

I feel bad when I see young actors getting massive roles in film and everyone slates them for it, because they’re just learning. Without a really good director, it’s a little like a lamb to the slaughter

It’s good fortune that much of His Dark Materials had filmed before coronavirus halted production of the series, based on Philip Pullman’s Northern Lights trilogy. In fact, the only episode that was yet to be filmed was a self-contained bottle episode, which meant it could be shelved without having an impact on the intricate narrative about Lyra, a girl in a parallel world whose search for her missing friend takes her on a greater quest to discover the truth about ‘dust’.

Kirby enters this series as Mary Malone, “a scientist who’s also trying to find out what this thing is,” Kirby explains. “But she doesn’t call it dust. She’s a quantum physicist, and she calls it shadow particles or dark matter.”

A fan of the books since their release at the turn of the century, Kirby was particularly delighted to the role of the accomplished Malone. “It’s lovely to play a female character who isn’t presented in relation to another character,” she says.

“Especially if you’re female and once you hit 40, you’re somebody’s mum or wife, or lawyer, even. But she’s very much on her own journey. She’s impacted by Lyra, but then Lyra goes and she just continues on her own.”

It’s her second fantasy drama adaptation in a row, having also contributed to the Artemis Fowl movie. But her repertoire goes much broader. Picking up two Ifta nominations along the way as the lead actress in Ken Loach’s Jimmy’s Hall and supporting actress in the John Hull documentary-biopic Notes on Blindness, it also spans indie films (Calm with Horses), Irish drama (Pure Mule), comedy sketches (Meet Your Neighbours) and theatre.

The stage is where the Clare-born actor made her name, appearing at the Abbey, the Old Vic, Shakespeare’s Globe and the Gate as soon she stepped out of drama school.

“I loved the freedom of touring, mainly around Ireland, and it was also a brilliant way to learn your craft,” she says. “I’m glad that when I was young I didn’t start with TV and film work. I feel bad when I see young actors getting massive roles in film and everyone slates them for it, because they’re just learning. Without a really good director, it’s a little like a lamb to the slaughter.”

Kirby stepped away from theatre when she had her son seven years ago, out of necessity rather than desire – the late nights and unforgiving schedule of theatre were not conducive to raising a child. But she returned to tread the boards last year with Cleft, written by her husband. Appearing on stage again turned out to be a welcome change from television and film productions, and it gave her a renewed appreciation of the form.

“When you do film and TV, you never really know what’s going to end up on screen, so there’s something lovely about rehearsing a play for a few weeks and telling the story directly to the audience,” Kirby says. “I had forgotten what it felt like to have that relationship. It’s storytelling in a very pure form.

“The world of film and television is much bigger, there’s an awful lot more people involved. Your role is important because what you do ends up on screen, but your performances can be edited in a very different way to how you played it, or the scenes can be cut. I enjoy being part of that big team, but the outcomes are definitely different.”

Is it difficult to relinquish that control? “It is hard if you’re working on something for a couple of months, and then when you see the end product, the work you did isn’t shown,” she says.

“But that’s what you sign up for. It is ideal to have the conversations before you take the job to know how the director feels about your character and their arc, although most people don’t have the luxury of having those conversations. They just take the job and hope for the best.”

Kirby’s seasonal plans are still to be confirmed. Usually Christmas involves travelling from London to spend it in Ireland with her side of the family, but this year they’re waiting to find out the restrictions first.

“I’d love to think that I’ll be in Ireland. We’ll see if we’re allowed to travel and what quarantining will look like. I always spent it in Ireland. I’d love to see myself there this year,” she says.

We’re usually scattered, so Christmas is the only time in the year when all of us are guaranteed to sit down and have dinner at the table together

“I can’t imagine missing it. We’re usually scattered so it’s the only time in the year when all of us are guaranteed to sit down and have dinner at the table together.”

Further ahead, 2021 is already looking busy, with the release of her next project, The One, a Netflix series based on John Marrs’s book about a world in which a DNA test can match soulmates, which transpires to be a mixed blessing.

And though theatre has all but stalled, she’s hopeful that the industry will stay resilient until its doors can open safely.

“I know that some companies have let go of all their staff and I’d love to think that as time goes on they’ll get help from the government to reopen and rehire. It’s hard to tell at this point,” she says. “But one of the great things about the theatre community is they know how to rise to the challenge.”

What do you normally do at Christmas?
I’ve a small family, there’s only three kids and three grandkids, so I always try and spend Christmas Day with my family. It’s the only time in the year when all of us are guaranteed to sit down and have dinner table together so it’s become really important. We do that either at home or my sister’s house or somewhere every year.

Christmas meal?
We try to get my mum to delegate but she’s not great at that. So it is me and my sisters helping, which is traditional. And then usually my husband will offer to do the dishes, which is nice.

Life in lockdown?
It has been very up and down. There’s been some things that have been great. We have a lovely garden, which a lot of people in London don’t have. We spent loads of time doing things that just make us happy, and honing in on those things. So that was lovely. But then I was really yearning to get home I really, really missed Ireland, and seeing family and everything and that was tough. It just felt very odd not being able to get home. There was a bit of work, I did a couple of audiobooks and my husband and I both write, but we found that really hard. He was still able to manage to do more than I, but we have a seven-year-old and the three of us were together all day every day, which is a lot. I felt like I didn’t have the headspace for much creative stuff, to be honest.