Friends, gin and a bit of drama: Christmas with CMAT

All I want: Dublin singer Ciara Mary-Alice Thompson on G&Ts with ‘notions’ 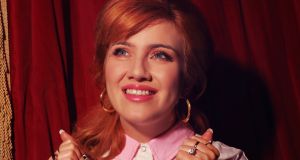 A Gibson guitar is on CMAT’s Christmas wish-list this year.

I’ll be somewhere in Dublin with my friends, six gin and tonics deep, from about 9am onwards.

What’s first on your to-do list when it comes to Christmas?

Stock up on that notions-y tonic water that costs like €3 a bottle from SuperValu. If you spend money on the tonic, you can’t taste the gin! You could pretty much drink paint thinner and not even know about it.

What’s your most vivid Christmas memory from childhood?

Being driven around all the housing estates in Finglas as a kid on Christmas Eve every year, to look at all the lights and decorations that everyone had on their houses. Finglas gaffs have the best fairy lights.

What do you want from Santa this year?

I have my eye on a Gibson guitar that I’ve wanted for years, but I don’t have a boyfriend and Santa doesn’t visit pop stars.

What was the best gift you received as a kid?

I got my first iPod when I was 12. Spent the whole of Christmas Day downloading Beatles songs off of LimeWire and it was a day well spent. Please don’t arrest me.

How do you usually spend Christmas Day?

It’s not exactly a Christmas film, but Calamity Jane. I watch it every year at around Christmas time. That film and the songs in it are so special to me. Every year it gets to around December 15th and you can hear me coming from about a mile away just like: “OH THE DEADWOOD STAGE IS A-ROLLIN’ ON OVER THE PLAINS. . .”

Christmas is the only time of year where you get to experience a truly, truly indulgent potato. The mash has cream in it, the roasties are covered in literal fat, and at this stage I wouldn’t be surprised if someone came out with a marshmallow gratin. I personally think that a potato should try to kill you.

What’s the most irritating thing about Christmas?

The pressure of trying to buy presents for other people shakes me to my very core. I also hate the thought of people stressing out over what to get me! I think we should do away with the concept of giving presents for anyone over the age of 18. You should just turn up to a party with food, booze, a board game and one attractive single friend to start some drama.

Will you be making New Year’s resolutions this year?

I would like to get back into the habit of speaking Irish. And I suppose I should go easier on the gin in 2021.