Gary Barlow: ‘It’s important to start getting back bits of normality... I’ve had enough’

The singer on lockdown, playing Ireland, Ronan Keating, and reuniting with Take That 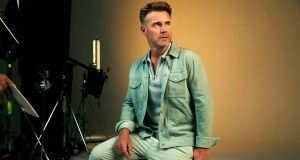 Gary Barlow: ‘We’ve got to throw the positive vibes out there and hope it happens’

In Gary Barlow’s London home the singer-songwriter becomes animated when he recalls a road trip from Belfast to Killarney in 2018 while on a solo tour. “We had beautiful weather, the scenery was like being in New Zealand. And the gig was amazing, it just went off that night. It was one of the best trips I’ve ever had,” he says. “Next time I want to take my wife so that she can experience it.”

That next time is already planned with a tour in June 2021 which includes a couple of Irish dates. He’s one of a few acts committed to touring next year, because “we’ve got to throw the positive vibes out there and hope it happens”. Certainly, with the events industry calendar thin on the ground, it needs a few big hitters to keep it in operation, and an ex-Take Thatter with five solo albums, six Ivor Novellos and a legion of loyal fans seems like a decent place to start.

“We have to make sure everyone’s safe first and foremost, but it’s important to start getting back bits of normality,” the 49-year-old says. “It’s eight months from now, so it’s a long way away, but I think if we’re still being told we can’t do this, that and the other, I don’t know who’s going to listen. I mean, I’ve had enough now.”

Lockdown was a monotonous but manageable one for Barlow. He spent it at home with Dawn, his wife of 20 years, and their three children – an unexpected treat “because our oldest is 20 now and there’s no way on Earth he would have spent 12 weeks with us if it wasn’t for someone telling him he has to”.

Family time helped to while away the days, but to keep himself creatively occupied and entertain those bored at home, he began The Crooner Sessions. They were a series of videos in which he duetted with big-name singers from the comfort of their own home (or local park, in the case of his fellow Take That member Howard Donald).

Collaborators included Robbie Williams, Shane Filan and his X-Factor co-judge Nicole Scherzinger, but first up was Ronan Keating, a good friend from his Boyzone days.

“We met around 1994 and we’ve always kept in touch even throughout the years when I wasn’t active,” says Barlow of their enduring friendship. “It’s rare that you meet someone who’s had a lot of success, and a long success.”

Barlow also spent the time putting the finishing touches to his new album, Music Played By Humans, recorded at Abbey Road in London last year. Big-band inspired it features a full-on orchestra and a range of special guests, from his good pal James Corden to soul star Beverley Knight. Though its shiny sound is in keeping with the spirit of the season, that wasn’t intended when he recorded it, he explains.

“It was never meant to be a Christmas-sounding record, but it’s funny how things entwine,” he says of the timing. “In fact I was told in July not to release the album this year because it was a rotten year, but I told them that that’s the point. I turned down all the advice and said I’m going for it.”

Though it’s otherwise been a relatively quiet one for Barlow, he’s already looking forward to the end-of-year festivities. The plan is to head to the family’s countryside retreat before Christmas, and spend a few cosy days in the warmth of an open fire. That said, the ever-changing Covid-19 travel restrictions in the UK mean that it’s a waiting game.

“Usually we have our family with us at Christmas, but we’ll have to see how many people we can have over,” he says. “There’s lots uncertainty, and I hate that. I like to make a plan and stick to it. It’s not in my blood, this way of working.”

With any luck, 2021 will go smoother, especially if the tour to accompany the album comes to fruition. Might we also see Take That back in action?

“There’s like a little invisible tie between us three,” he says, smiling. “Usually when I start feeling that I’m ready to get the band back together, Mark calls me, and then How. It’s like a timer that goes off when we’re ready for some action. But at the moment, there’s nothing. If we could get gigs up and running again, like the festivals and one-dayers, I’m sure everyone would come back. But we just need to see.”