‘It felt like life was finished, that everything was going downhill’

New to the Parish: Papy Kahova Kasongo arrived from Democratic Republic of Congo in 2015 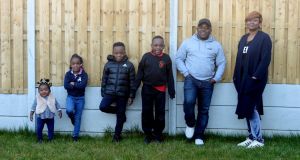 The Irish skies were dark and overcast the afternoon Papy Kahova Kasongo, his wife, Nadine, and their two sons disembarked from their flight at Dublin Airport. It was April 28th, 2015, and the Congolese family had travelled to Ireland with the help of an agent from South Africa. Kasongo kept a sharp eye on the man as the family followed their fellow passengers into a large, grey airport building. Suddenly he disappeared.

“We could see the airport immigration passport control up ahead but we didn’t have passports. We looked for him everywhere. We went into the toilets to search, but couldn’t see him.”

“We sat down on a bench across from the immigration officers. My wife was crying because we didn’t know what would happen, and my two sons – aged two and four – were crying too. Me, I was praying.”

He remembered how the South African man had told the family to request asylum upon arrival in Ireland. However, without any English, he didn’t know how to explain his situation to the airport officials.

When officers approached the distressed family, one tried speaking in French. Kasongo is a native French speaker but he struggled to understand the woman’s accent and vocabulary. “They put us in a room, where we waited for three hours. They searched me and a woman searched my wife, too. Then they put us in a car and brought us to the Department of Justice.”

Kasongo was born in the city of Kisangani in the north of the Democratic Republic of Congo. He recalls a turbulent childhood growing up between family members as the first and second Congolese wars raged through the late 1990s.

He and his wife met as economics students at university in the southern city of Lubumbashi. In 2008 he secured a job with a brewery that produced Guinness. There he used to sign invoices addressed to the Diageo offices in Dublin. Two years later the couple was married.

“Life was good then because I was working. I got a promotion and became head of the department for control management and was in charge of the budget. We lived well, things were good.”

Kasongo, a member of the church since 2005 and follower of Mukungubila’s teachings, fled to his hometown of Kisangani. However, he later learned his wife was among the hundreds of people to be arrested.

“My children were locked up with my wife. Some of the women in there were pregnant. They were in a ward, and if you had a mattress to sleep on, you slept there. But if you don’t have that you’re just there with your kids.”

Nadine eventually revealed to police where her husband was hiding, and Kasongo was locked up. “They hit me. I still have scars from then. I was left for days without food.”

After a year in jail, he says, his wife’s brother-in-law, a prominent businessman, secured the family’s release through his contacts in the secret service.

In April 2015 the family went into hiding until friends found a smuggler to bring them to South Africa and on to Europe. A few days later they arrived in Dublin.

The family spent one night in the now-closed Hatch Hall direct provision centre in Dublin city centre before being transferred to Mosney in Co Meath. A fortnight later they were moved to a centre in Tramore, Co Waterford.

“We spent one year in Tramore. When we were there we couldn’t sleep. We just kept thinking about everything we had gone through. It felt like life was finished, that everything was going downhill.

Even now my wife still has trauma from that time. She still has memories coming back

“We stayed in one room for about six months and then they moved us into two rooms. But you don’t have privacy. It’s not a life to live. Then again, because we came from prison, for us it was better than being in jail.”

In 2016 the family was sent back to Mosney, where Kasongo visited a GP who referred him on to Spirasi – an organisation supporting victims of torture. “I was not good at all at that time. Spirasi helped me learn English and put me into activities as well. I was going out and meeting new people.”

His wife also availed of Spirasi’s support to come to terms with the time she had spent in prison with her children. “Even now my wife still has trauma from that time. She still has memories coming back.”

In December 2018 the family received a formal recommendation to receive refugee status. Five months later the Minister for Justice confirmed their permission to legally stay in Ireland. Soon after, Kasongo met with representatives from the Depaul housing charity, which had been tasked, through its Cosán Nua programme, to help refugees move on from direct provision into private accommodation.

In December 2019 Kasongo became one of the 330 people supported by Depaul last year to successfully find a home to rent. After seven months of searching and rejection, Kasongo had felt close to giving up. “We had no hope left that we would find somewhere. We were hoping to start a new life but things were going down again. We went to Mayo, Galway and Roscommon. At that time I didn’t even care where I lived, I just wanted a house.”

We have somewhere to stay, we have a life and it gives you hope the future could be good

Gideon Amentorge, who works with Depaul and has supported the Kasongo family, says many landlords are reluctant to accept HAP payments, and others worry they may have additional issues if they take in a refugee family.

“Sometimes you go to viewings and there are 30-40 people ahead of you, and many are professionals,” says Amentorge. “You’re wondering, How will I convince this landlord to consider this family? It can be really tough.”

The Kasongo family, which now includes two daughters born in Ireland, moved into their new home in Balbriggan, north Co Dublin, in January.

“It wasn’t easy at the start, because the house was unfurnished. But we went to shops for furniture and got some support in buying stuff. My kids can walk to school in Balbriggan and come back to their own home. We have somewhere to stay, we have a life and it gives you hope the future could be good.”