Róisín Ingle: If I had to choose between good friends and guanxi, I know what I’d pick 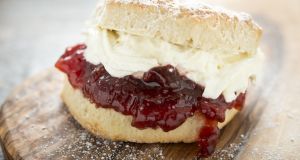 It was a queen of scones. With clotted cream all day long. Photograph: iStock

I met my friend on a bright Thursday morning to talk about a recent crushing disappointment he’d had. He had cried for a day about it. Curled up on his bed in the foetal position. Cried and howled and thought murderous thoughts. He had a sad story to tell of how mediocrity can trump excellence when certain people are pulling the strings.

We were sharing a scone in The Commons underneath the Museum of Literature Ireland or MoLi as Dubliners and people from all over the world are beginning to know it. It’s pronounced Molly, rhymes with trolley. Not Moley rhymes with Foley, as I heard a Booker-nominated author call it on radio recently. It’s MoLi. Molly. As in Bloom. Yes, I said. Yes.

The scone was a queen among scones. It came with small pots of excellent jam and gorgeous butter. I’m not normally one for a scone – it’s pronounced scone, rhymes with bone – but this one had a hint of cinnamon that elevated it from the usual offering. It had the right amount of crumble when you bit into it. Not too many raisins either. It was gratifyingly misshapen and big enough for sharing.

As he told me about the unfair happening, the crushing disappointment, I asked for cream. “Ordinary cream or clotted cream?” the waiter asked.

My friend, who has his priorities the right way around, broke off from his lamentations to reply “clotted cream all day long”. We shared the scone with butter and jam and clotted cream, and as we ate he told me about a Chinese word I’d never heard of before.

Guanxi. It’s pronounced gwon-she, according to the internet. Or maybe gwan-she in Ireland. It means “networks” or “connections”; it’s the stuff that oils the wheels of an individual’s progress through the world.

A person who has a lot of guanxi will be in a better position to capitalise on opportunities than someone who lacks it. You can accumulate guanxi through good networking and merit, or you can be born with guanxi because your parents have it already and it gets passed on to you.

In a small country like Ireland guanxi counts for an awful lot. Low reserves of guanxi, even if you are the most talented and clever person in the room, can lead to crushing disappointments.

When we hugged goodbye, I went upstairs to spend some time in the museum. It is not like some cultural institutions, in that as soon as you go in you are reminded that just over 50 per cent of the population is female and that the female section contributes significantly to the cultural landscape of this country.

There was an exhibition about Eva Gore Booth, and a display of writers included Anne Enright, Marian Keyes, Sarah Maria Griffin, Maeve Brennan and more. In the gift shop they have cushions and pocket mirrors bearing the face of Maeve Binchy. The famous “Important Writer Men Teatowel” does not get a look-in here. Female writers have had a massive guanxi problem, and MoLi is trying to address that.

Later I went for a spin in pale sunshine on a Dublin Bike. I cycled around the grand redbrick houses arranged over several splendid storeys. I pedalled around embassies and past the embassy chipper. I admired the trees that seem to grow taller and more plentifully on the south side of the city, which might also have something to do with guanxi.

On Raglan Road I thought about Big Jim Larkin. Someone told me he had a home there once, even though it feels far too posh a place for a socialist like him. Then I read that Charlie Chaplin visited him in a New York prison once, and Archbishop John Charles McQuaid visited him in hospital shortly before he died. It makes sense that Larkin’s guanxi was as well developed as his social conscience.

I ended the afternoon in a hotel bar where I’d once seen Liam Gallagher. He was friendlier than I expected. “A’right,” he said, smiling for the people who requested selfies.

I met Gay Byrne there for coffee a few times. I miss him. I find myself wanting to text him sometimes. “Hi Gay, guess what? I’m back writing in the paper” is what I went to text him, before I remembered he wasn’t here. And I thought of my friend Aisling, who’s been gone for over two years. I miss her cackle. “Hey Aisling. Hey, Ais” I keep wanting to say.

I had a pint of Guinness and thought about the priceless nature of the friendships that sustain us. The people we can be honest with about crushing disappointments. The ones who know us, really know us, and love us anyway.

If I had to choose between good, solid, life-enhancing friends and buckets of manufactured, inherited guanxi, I know what I’d pick.

How can I help my nine-year-old son who has become depressed during lockdown?
10