How much time do you actually spend with your partner? 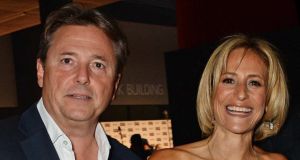 Emily Maitlis and her husband, Mark Gwynne: the couple are like ‘ships that pass in the night’. Photograph: Dave Benett/Getty

It will be a familiar scenario for any couple juggling long, or antisocial, hours. The Newsnight presenter Emily Maitlis has said she and her husband, Mark Gwynne, an investment banker, “don’t see enough of each other”. They have been married for 18 years, and because of their jobs, she said in an interview with Good Housekeeping, “we’re like ships that pass in the night”. But, she added, “it works”.

In today’s world, everything is so fast and often people don’t take time to be curious about their partners’ lives

How much time do couples need to spend together for a healthy relationship? It depends on the couple, of course, says the relationship counsellor Silva Neves. “What would be ideal for couples, especially if they have little time, would be to have meaningful contact first thing in the morning – that can be one full minute of a meaningful hug or kiss, because that really deepens intimacy. When people come home, do the same thing. If it’s possible, send a few texts during the day, or even a heart or a kiss emoji. Those are small things that take very little time but make a difference in the connection of couples.”

It becomes a problem, he says, “when people start feeling taken for granted in the relationship. Someone might feel they are not being seen, or heard, any more. In today’s world, everything is so fast and often people don’t take time to be curious about their partners’ lives.”

It can also be an issue if there is a shift in the relationship – if you go from seeing each other often to not very much, or the other way around. “You get used to what’s normal for you, and some relationships start with always having long gaps,” says Dee Holmes, a senior practice consultant for Relate. “I don’t think you can say there’s a minimum [time together needed] because for some marriages in which people have quite a lot of time apart, that works for them, but it wouldn’t work for everybody.” Too much time together may also not be ideal. “I think it is healthy to have time apart because it gives you other things to talk about, and when you come back together you appreciate each other more.” But again, for some couples, being together all the time works.

What matters, she says, is how well you communicate with your partner. “Even if you’re not physically together, if you’re still communicating, that stops misunderstandings and people feeling rejected or alone. But you can’t beat quality time together.” She says scheduled couple time – such as Maitlis’s Saturday night, when she is “always at home” – is important for the health of a relationship.

Being in the same place physically does not always mean it’s quality time, she adds. “It doesn’t necessarily mean you’re having a good relationship if you’re playing on your phone all night. It’s about what you’re doing in that time together more than anything.” However much time that is. – Guardian