Now we find ourselves without a place to live . . . the best-laid plans and all that 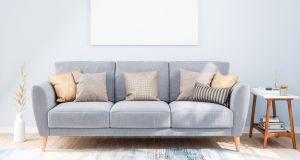 The sofa. A good place to think. But now it’s gone.

Sitting here, in the space in our living room where the sofa used to be, it’s hard to find this situation anything but funny. The cat is bereft. The sofa – a slate grey Ikea affair, three-seater, if you don’t mind – was her sanctum sanctorum. She is the same shade exactly as our now ex-sofa, and would sort of dissolve into it like Arnold Schwarzenegger in the famous mud scene in Predator. You would go to sit down and realise only in the last precious seconds that two honey-yellow orbs were rolling thickly at you from the cushions, their expression always either semi-conscious or apparently scathing. Himself sat on her more than once, but she was good about it, shooting out of the room as though fired from a cannon and loping back in later because her memory is short and being generally decent, she isn’t prone to grudges.

The sofa was the first – and only – we ever bought. He went to Ikea to get it two or more years ago now. The purchase felt like a palpable marker of independent adulthood. It seemed at the time as though you had to have your life sort of together if you were buying a sofa, and a new one, at that. Unsullied by previous derrières – ours to besmirch. My mother had died the year before, and would have given a look sharp enough to cut the ankles from under you if you had the bad manners to put your shoes on her sofa. At last, I had a sofa of my own, and could similarly tell people (if they dared) to get their shoes off it right this minute.

Unable to go on the day, I counselled himself most vigorously – a two-seater was a wiser purchase; cheaper, and more likely to fit in standard places if we had to move. We have, in fact, moved three times since then, and the three-seater he bought hasn’t comfortably fit anywhere. We’ve paid more to move it across oceans than it originally cost, and I’ve complained at length about this fact while helping to nudge and thrash it into ill-fitting corners of smaller-than-ideal rooms, or hitting my leg on the arm of it as I go past. That’s why it feels so appropriate that I should be sitting here like a little boat on what looks from here like the vast ocean of the living room floor, wishing that I hadn’t given the sofa away.

It’s now the property of a nice young couple – judging by the accents, I’d guess Romanian, but I didn’t ask. The whole business was transactional and swiftly concluded. I needed to get rid of the sofa. They needed a place to sit and had a van, so they came to get it last night. I had to get it out of the place by the weekend, so I hadn’t even tried to sell it. In fairness, the sofa-coloured cat quite literally tore that plan to shreds. Evidence of her devotion to it was clawed into the back, and tufts of the fabric sagged like it was attempting to hold in its innards.

It wouldn’t fit in the new place, you see. The one we are moving into this weekend. Or rather, the one we were moving into this weekend, because the landlord just pulled out at the last moment, after we had paid the money and returned the signed agreement. Now that we find ourselves without a place to live and without a sofa, I realise that the sofa is the place I go to when a problem presents itself. I wiggle my way deep between the cushions, and think.

It will work out. It is a good reminder, however – the gaping hole in our living room – of the utter absurdity of being alive, and just how little control we really have in any given situation. The best-laid plans and all that. For now, I’m going to make some toast (with marmalade – essential for digesting hard truths), and some tea, and enjoy both on the living room floor. Tomorrow, we’ll set about finding somewhere to live, humbled by the reminder that there’s far more to independence than owning a sofa.

Lucky pup: How to dress up your dog this Christmas
Real news has value SUBSCRIBE