‘I’ve been working since I was 19. I’m not used to receiving handouts’

New to the Parish: Cristhian Nuñez Centeno arrived from Nicaragua in 2018 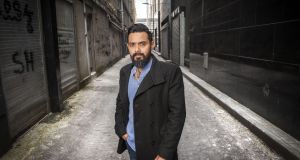 Cristhian Nuñez Centeno: “At the end of the day, when you think about what’s happening to millions of Nicaraguans, we’re very lucky.” Photograph: Daragh Mc Sweeney/Provision

Cristhian Nuñez Centeno was standing in the kitchen of his home in Managua when he first read about the student deaths in the capital city. Nuñez and his partner had made plans to travel to the coast that day to celebrate his birthday. However, beach arrangements were quickly forgotten when news started to filter through of the Nicaraguan government’s violent response to protests around the country.

“I sat down on the stairs and just started to cry,” remembers Nuñez. “I was in complete shock. They had killed seven or eight young students in the university that day. People were posting on social media to get the students out. It was like watching a horror movie in real time. What must it have been like for those students sitting in the basement, waiting to be assassinated?

“These were young people with dreams who were shot in the head. They weren’t facing usual police officers using rubber bullets. These were paramilitaries prepared to assassinate people.”

On April 18th, 2018, protests broke out across Nicaragua after the government announced plans to cut pensions and social security. Videos and images posted online of pro-government groups responding with violence to student demonstrations led to further protests which were also violently quashed.

The UN warned that Nicaragua was “sliding into a dangerous spiral of violence and impunity with killings taking place daily” and that reprisals against those holding dissenting views against the government “should not be tolerated”.

Nuñez was particularly struck by the death of Álvaro Conrado who, days after his 15th birthday, was shot in the neck while delivering water bottles to student protesters. Conrado’s final words, “it hurts to breathe” (“me duele respirar”), went on to become a slogan for those calling for an end to the violence.

A small business owner, Nuñez decided to provide supplies to the students after they appealed on social media for food and water. Nuñez had only set up his business a few months previously and had started to distribute his bags of granola and protein bars to small supermarkets and hotels around the country.

Nuñez sent 70 bags of granola to a local university, forgetting that the business’s name, address and phone number was printed on the packaging. A few days later motorbikes started to appear outside Nuñez’s home.

“They shouted they were going to kill me, that I was supporting terrorists. People were following us everywhere we went, the persecution was becoming more and more real. We couldn’t eat, sleep or work in peace. We couldn’t walk or drive down the road. We denounced these people to the police but they didn’t follow up. I never thought something like this would happen, I was just supporting the students.

“The visa process for the United States and Canada was very long and the threats towards us were becoming a more and more serious. We didn’t have much time to act, so we decided to go to Ireland and start over from zero.”

In October 2018 Nuñez and his partner Wilfredo travelled to Guatemala, then Panama and on to Spain where they were questioned by immigration officials before continuing their journey to Dublin.

“You feel like a child in that situation; you’re being treated like an ignorant child or a delinquent. Everyone complains about the way the United States treats immigrants but Europe does the same thing.”

After arriving in Ireland, the couple spent a month in the Balseskin direct provision centre before being transferred to the Glenvera centre in Cork. Nuñez says the staff at the centre have been very friendly but has struggled to adjust to living in a communal setting.

“Living with so many others is difficult. You can’t make your own food. It’s very repetitive and lacks the necessary nutrients to stay healthy.

“This law which says you can’t work for nine months after your arrive is a trigger for people, you don’t have the freedom to get out and about. People arrive believing they can move forward and start afresh but they’re detained for nine months. You don’t get those years back.

“I’m 35 years old, I’ve had my own company and I’ve worked my whole life. Not being able to do anything is very frustrating. I would never want to be a burden on a country because I was never a burden on my family. I’ve been working since I was 19, I never relied on my parents. I’m not used to receiving handouts.”

Nuñez feels frustrated by the small number of asylum seekers who have chosen not to find jobs under the recently introduced right to work legislation. He also believes some of the residents, who have received international protection, are choosing not to leave the centre.

“There are some who stay out of necessity but there others who don’t leave because they are comfortable. This is not fair when there are thousands of people who need this space and support.”

Before leaving Nicaragua, Nuñez published his first novel, the first instalment of a fantasy trilogy entitled The Dreamer. He planned to continue writing in Ireland but finds it hard to work in the direct provision centre.

“The people I live with are good people but it can get very noisy and it’s difficult to find somewhere where you can concentrate.

“When you feel a bit depressed and then go out and buy some fresh flowers it lifts your soul. That’s what reading and writing does for me.”

Nuñez continues to receive threats through social media from paramilitaries in Nicaragua and worries about his family in Managua and the overall stability of his home country.

At least 325 people have been killed since the protests broke out last year and more than 2,000 injured, according to the Inter-American Commission on Human Rights, while the UN refugee agency reported last month that more than 60,000 Nicaraguans had fled the country fearing for their lives.

Once he receives refugee status, Nuñez hopes to re-launch his granola business in Ireland, finish writing his books and find a publisher to print the series.

“Life in Ireland has been difficult but we’re very grateful to this country for opening its doors to us and saving our lives. At the end of the day, when you think about what’s happening to millions of Nicaraguans, we’re very lucky.”