‘My issue was I could not tolerate the male dominance’

New to the Parish: Hina Khan arrived from Pakistan in 2015 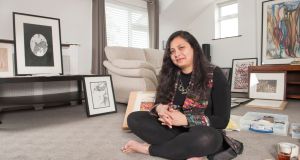 Hina Khan, an artist from Pakistan, who moved to Ireland with her family in 2015, at home in Kinsale, Co Cork. Photograph: Daragh Mc Sweeney/ Provision

In June 2018 Hina Khan spent a month living in a fire station. The Pakistani artist had been in Ireland three years when she was given the opportunity to spend four weeks in the capital developing an exhibition of her work at the Fire Station Artists’ Studios in the north inner city.

“It was a like a dream come true. I had the space I needed, I had the materials I needed. My space had been very congested before that. I couldn’t work on a big scale but I really wanted to produce large images. I was always looking for space and then I got this opportunity.”

Khan arrived in Ireland in June 2015 with her husband and two young sons. The family were forced to leave their home in Pakistan after Khan’s husband faced dangerous threats because of his work as a writer. A graduate in fine art, Khan had been producing art examining the treatment of women before the family fled abroad.

“All my work was about social development. I had done my thesis around prostitution, gender discrimination and cruelty towards women. My issue was I could not tolerate the male dominance.”

It was scary at first, when you arrive in a new place you don’t know how the people are or how you can connect with them

During her first month in Ireland, which the family spent in the Hatch Hall direct provision centre in Dublin, Khan did not paint or draw. “It was scary at first, when you arrive in a new place you don’t know how the people are or how you can connect with them.” Shortly after the family was transferred to the Old Convent centre in Ballyhaunis, Co Mayo, Khan’s husband became ill with heart problems.

“I felt so alone and didn’t know how I could manage. The hospital was 45 minutes away and there was no public transport. I felt very depressed. When I woke up in the morning I would check to see if my husband was still alive or not. It was surreal.”

Once her husband had returned from hospital and family life started to settle into a routine, Khan’s urge to draw returned. “The people in Ballyhaunis were really helpful. I told the manager I was a professional artist and he said the ETB [Education and Training Board] was offering some courses. The council officer visited and saw my paintings. She guided me in how I could build up my work and display it.”

As time passed, Khan developed a network of artistic contacts across Ireland. She met the local arts officer and was given studio space to work on some projects. Back in the direct provision centre, the manager allowed her to use paper from the office to practise her drawing.

“I felt very lucky, I had all these positive people around me who saw my work and pushed me to do more. They made me very happy.

If somebody locked me in a room with just a pen and paper, I would survive

In 2018 Khan successfully applied for the inaugural Create artists’ residency at the Fire Station studio in Dublin. The award, managed by the national development agency for collaborative arts, was available to any artist from a minority background, including those living in direct provision. Inspired by the Syrian refugees she had met in Ballyhaunis, Khan created an exhibition entitled Visible n invisible, which was displayed at the Ballina arts centre as part of her first solo show in Ireland.

“Everyone had been shocked by the images of dead kids floating in the water. I couldn’t get them out of my mind. I had talked to people from Syria. They couldn’t speak English and they had so many struggles. I wanted to show that there should be no discrimination. We are all human beings, humanity comes first. I felt a lot of pain for the Syrian people so my work was about that.”

After her Dublin residency, Khan was invited to take part in the Create summer school which brought together 14 artists, thinkers, activists and practitioners to explore the idea of cultural diversity. Khan had also applied to study at the National College of Art and Design and was overjoyed when she received a letter inviting her to come to Dublin. However, the college withdrew the offer upon discovering that Khan already had a bachelor and master’s degree in fine art and suggested she enrol in the master’s programme the following year.

In the meantime, Khan had already requested a transfer to a direct provision centre closer to Dublin so she could attend classes and, in September 2018, the family was moved to the Hibernian hotel in Abbeyleix, Co Laois. Conditions in the new centre were totally different to what the family had experienced in Mayo.

“It was very congested and the manager was not co-operative. My husband is a heart patient so I needed to cook special food for him but there was no kitchen. I felt suffocated, I couldn’t produce any work during that period. In Mayo we had a house, we had independent living, everything was different.”

Two months after arriving in Laois, the family received refugee status and permission to remain in Ireland but struggled to find a place to live and remained at the centre until this past April.

My career has sparkled because of Create and the fire station. I feel like I am somewhere now

“We looked all over Ireland for somewhere to live but finding a house was very difficult. In the end we found an apartment in Kinsale. My husband’s friend is there, he understands his health condition and I got a job in a restaurant in Kinsale.”

Khan is very grateful to the Irish artistic community for welcoming, embracing and promoting her work. “My career has sparkled because of Create and the fire station. I feel like I am somewhere now. My kids are also very co-operative and my husband is supportive. He pushed me when I wasn’t painting; he told me do something creative. Without the support of my husband, I couldn’t have done any of this.”

Her goal is to display her work in a Dublin gallery. “I’m working hard and I have very good circumstances now. I think I’m doing my best because we’re out of the system and we’ve started living on our own. My main ambition is to work. I feel happy when I work, this is my passion.”

The 2019 Create summer school on cultural diversity takes place in July. The deadline for submissions is Monday, June 3rd

Lockdown Halloween: the safe way to have grisly fun
5