New to the Parish: Carolina Chimirri arrived from Brazil in 2019 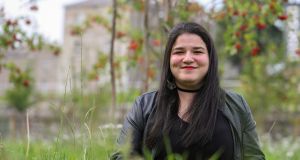 When Carolina Chimirri moved to Dublin in 2019 she had never worked as a cleaner before. The Brazilian lawyer knew it was highly unlikely she would find employment in Ireland in the legal field and focused on finding any available work to pay her expenses while taking English classes.

In the months that followed, she would find herself signing up for a vast array of jobs, including selling beers at Westlife concerts, working in a pizza shop, working behind the deli counters of newsagents and cleaning people’s homes.

The 34-year-old also had to reacquaint herself with the student lifestyle. “I’m a lawyer so going back to being a student felt weird, but in a good way. I had to share my room with two other people and shared a house with 10 others.

“At the start it was really good fun because you want to live the whole experience but now, after more than a year, I don’t want to share with so many people any more.

“You do get lonely sometimes and you need people around you. But 10 people sharing one fridge, that’s crazy. You can do that when you’re 18 but not when you’re 34.”

Chimirri says many Brazilian students work as cleaners to fund their studies in Ireland. These include a well-known Brazilian soap opera actress who recently appeared in her country’s national news after posting photos online of the work she carries out to make ends meet while studying abroad.

“I did sometimes feel frustrated doing this kind of work because I was lucky and never had to do those jobs in Brazil. I never thought I’d have to work as a cleaner but I’ve realised [it was] actually good for me. It’s made me see the world in a different way. You learn a lot about yourself as a person when you work in the service industry. I came here to learn English but I’ve learned so much more; I’ve developed another perspective.”

Born and brought up in São Paulo, Chimirri always knew she wanted to be a lawyer. When she was just 10 years old, she recalls telling her mother that she had two goals in life – to own a dog and become a lawyer. She was the first member of her family to study law, a decision of which, she says, her parents and sister were hugely supportive.

In Europe if you are poor, you have some support and are not totally miserable. But in Brazil, people don’t even get the minimum they need to live with dignity

As she grew older, Chimirri became increasingly aware of the deep inequalities that exist in her home country. “I consider myself privileged; things were not that hard for me. But there are so many people in Brazil who don’t have those privileges.

“Brazil is a great country but it has a lot of problems. It’s too big – that’s something I realised when I came here – it’s like a continent. In Europe if you are poor, you have some support and are not totally miserable. But in Brazil, people don’t even get the minimum they need to live with dignity.”

Her decision to live abroad for a while was largely driven by the current political situation in Brazil. Uncomfortable with the country’s political shift and the election of Bolsonaro, she decided the time had come to explore somewhere new.

The granddaughter of Italian immigrants, she had always dreamed of visiting Europe and decided to base herself in Ireland. “Everybody I knew who had lived in Ireland always told me it was a great experience and they didn’t regret it at all. I heard that Irish people were very warm; I think that’s why Brazilians like Irish culture. Of course, like everywhere, there is some racism. But most people here are awesome.”

Late last year, Chimirri decided to extend her stay in Ireland and found a job in a city centre Spar before Covid-19 reached Ireland. The newsagents remained open throughout the pandemic and so, unlike most of her peers, Chimirri did not lose her job. She says she was very impressed by the financial support the Government offered, not only to Irish citizens, but to foreign nationals living here.

“The Government realised this was the smart thing to do. They knew by protecting people who live here from the the start there would be a return on that in the future. If you leave people stuck at home without means to pay their rent, that is not a smart move.”

While Chimirri became good friends with other Brazilian and Latin American students in Dublin, she was determined to meet Irish people too. “Brazilians can be quite cliquey and you have to be open to get to know people. If you come here and just go to Dicey’s and eat food from your own country and don’t speak English, that’s your own choice. You get on easily with Latin people and that’s normal because you’re in the same boat. But, after a while, I wanted to meet people from here and get to know the culture.

“I’ve met Irish people because I talk a lot to people in the Spar where I work. When we start to talk I just say let’s get a beer. You have to be open to people, you have something to learn from everybody.”

Chimirri, who is taking English classes at the Ned Training Centre in Dublin, a member of the Progressive College Network, is conscious of how lucky she was to land on this school when selecting a place to study in Ireland. The schools where many of her friends attend have made very little effort to provide decent online classes during the pandemic and charge students a lot for courses, she says. Chimirri’s school, on the other hand, has offered great support to its students through lockdown, she adds.

She misses her family and has found the separation from her parents particularly difficult during Covid-19. “My dad is very stubborn and just keeps opening his shop but I can’t blame them, they don’t have the perspective of the virus that we get here. Maybe if I was in Brazil, I’d be saying the same thing. When you don’t have a leader who is serious about the situation, you don’t feel you need to worry.”

Chimirri is unable to practise as a lawyer in Ireland because of the different legal system but is considering moving to Portugal where she can further develop her career. “I miss a lot of things from Brazil, and I know Europe isn’t perfect. But I also have to think about my future. I have to get my Italian citizenship first, and then I would like to study again.”

We would like to hear from more people who have moved to Ireland in the past 10 years. To get involved, email newtotheparish@irishtimes.com. @newtotheparish