You can't blame kids for thinking: The Leaving Cert? Why bother? 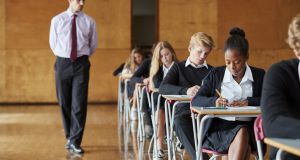 No educational system I’m aware of has come up with anything better than an exam. It does roughly assess how much they’ve studied. It is supposed to be difficult. Generally speaking, pressure is a good thing.

They say – whoever they are – that the Leaving Cert is the most difficult exam anyone goes through. Not just because of the sheer volume of information that has to be regurgitated, but because of its life-defining, once-off nature. Get the Leaving wrong and you’re screwed for life.

Which of course is nonsense. Yet I suspect some parents still want it to be true. In a way, you can’t blame them.

Daughter#2 is this year’s victim, and while it is difficult and daunting, she and her peers seem well aware of the goods-in/goods-out aspects of the exam. The Leaving Cert is transactional. She ingests a vast dollop of information that she can forget by the end of June, and in return for performing well at this task, she gets the chance to go to another place of learning where she can learn even more information which will become the basis for her life-long career.

That’s the hope. Daughter#2 is well aware of the high drop-out rates in college – one-in-six in first year – of the fact that many change courses or end up in jobs that have nothing to do with what they studied. She’s seen two siblings already do this.

But this isn’t to bitch about the Leaving. No educational system I’m aware of has come up with anything better than an exam. It does roughly assess how much they’ve studied. It is supposed to be difficult. Generally speaking, pressure is a good thing.

The problem isn’t the Leaving; it’s the world. The job-for-life model, the very idea of a career is disintegrating. For my generation, it would be a comfort to think that the Leaving sets your kids on a steady path through life: that they are sorted. But it doesn’t do that anymore. Economics, automation and computers are doing away with many job categories and not creating enough new ones.

And then there’s the weather. The old cliche is that the sun starts shining around June 8th, but temperatures were in the teens in late February. And we all know why. It felt like spring, but we’re the frogs in the steadily warming water. By the time Daughter#2 is my age, the global temperature may well have risen by two degrees. This was previously the target rise for the end of this century, not halfway through. (The UN now estimates that the rise by the end of century will be 4.3 degrees. It will cause $600 trillion dollars of damage to the planet. That’s twice the amount of total wealth in the world today.)

In 2015, the city of Bandar Mahshahr in Iran reached a temperature of 73 degrees Celsius: enough to slow-cook a chicken. When Daughter#2 is my age, parts of the Middle East and India will be uninhabitable: too hot to go outside in summer, the soil boiled into sterility. No food, floods and heat will cause mass migration. Consider this: the five million or so migrants from Syria and other parts of the world caused political chaos in Europe. When she’s my age, Daughter#2 will witness 20 times that: 100 million people trying to find a place to live. This will devastate the entire planet, a planet with an increased population and a reduced capacity to produce food.

You wouldn’t blame her generation for thinking: The Leaving Cert? Why bother? But you don’t encourage such ideas. You want things to be okay.

This should be the bit where I declare that time is running out and we have to act to maintain our world in a form similar to what we enjoyed. But it’s already too late for that. Parts of the planet will be lost. Millions will die. The only remaining question is how awful it’s going to get. Our children are going to endure far, far worse than the Leaving Cert.