‘I would probably go back and just be gay much earlier’

In Conversation: Artist Adam Matthews and musician Alma Kelliher who appear together in RIOT, at Vicar Street in May 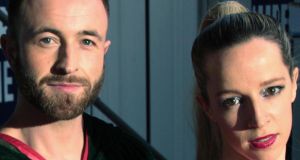 Adam Matthews and Alma Kelliher, who appear in RIOT at Vicar Street in May

Alma: Both of my parents were very good at teaching us about being honest to ourselves and work hard at things that we love. We were never told what path to take, but just to work your arse off at it.

Adam: My dad’s obsession is music, so there’s always been support and interest in whatever I was doing music-wise. So I owe encouragement, acceptance, and manners.

Alma: You do have excellent manners, now that I think about it. You also look like your dad, don’t you?

Alma: So there’s that too, you ride.

Alma: I pulled my ass muscle which was really sore and I was trying to get the knot out of it and I cried.

Adam: In the studio when we [Matthews’ band, Phoeno] were recording. We listened back to a song, had the lights off, and we all looked around and had tears in our eyes. It was deadly.

Alma: I had a sleeveless striped faux wool poloneck in purple, beige and gold. It was horrendous. I wore it with a below the knee purple denim skirt which had a front slit, and my sister’s tan-coloured knee-high boots that were bordering on wellies. That has aged terribly.

Adam: Mine was a pair of dark brown, bootcut cords from the Eager Beaver. I wore them all the time, like every day.

Adam: I was on a flight to Gatwick and the plane tried to land and came back up in a proper storm. A pregnant woman beside me thought she was going into labour, a kid in front puked everywhere, the plane was going from left to right. I literally thought I was going to die, and I reached resolution.

Adam: Yeah! I was thinking “I have absolutely no control over this, so if we’re all about to die, that’s a lot of people, and I’m insignificant in that case.” I clapped when it landed. And I never clap.

Alma: I’m glad you’re safe. I’ll interpret this differently. Recently our gorgeous little dog died. It’s the first time something from my daily life is just not in my daily life anymore. The ephemerality of it all hit me like a tonne of bricks. I’ve appreciated the learning process.

What do you think is your most dominant personalty train?

Alma: I like to be good at things. It’s more than being competitive.

Adam: You do everything really well. Mine is kind of a bad trait. My dad has it and my sister has it, this obsessive thing where if you’re interested in something you have to know everything about it and investigate every aspect of it.

Alma: New York. I don’t just want to be there, I want to be a New Yorker.

Alma: There’s one book that I owe a lot to, it’s a fantasy book by Raymond E. Feist called Magician. When I got to college, I based my first sound design project on that book. The idea of musically representing someone else’s work was totally blown open by that.

Adam: Mine is probably a little trashy. Sharp Objects by Gillian Flynn. I want to write that type of book. I’m going to write it! That influenced me a lot.

What is your ideal late-night snack?

Alma: I didn’t expect that!

Adam: With almonds. Nothing beats a Magnum.

Adam: Popcorn and a Magnum?

Do you have any tattoos, and if so what do they mean?

Alma: Zero. Over to you.

Adam: I have one of Henry, my dog, I have the Fibonacci sequence, some ruins. I have a stag – we live next to the Phoenix Park, so we see deer every day. That’s it. Oh, wait! I have a triangle as well.

Alma: Just before I came here, I was in a cafe after a 40-minute power-walk. I threw off my jacket and unbeknownst to me my shirt had unbuttoned itself, and I accidentally threw off my shirt as well. So I’d like to apologise to all the people in the cafe to whom I exposed myself.

Adam: I feel like there could be people who think I’m a real d**k because I’m a little socially awkward, so instead of saying “hello”, I may just not look at someone. Philly [Matthews’ partner] makes fun of me all the time: “just be normal”.

What part of your life would you like to revisit?

Adam: I would probably go back and just be gay much earlier, be a gay teenager.

Adam: That is a really good time. And you don’t get hangovers as bad. I didn’t think mine through properly, I don’t want to be a teenager! I’ll go back to 23 to 27.

Alma: Then we could meet earlier and hang out.

Adam: Well, we are time-travelling together now.

Alma: Cool, see you there.