How do you get ticks out of your arse? Slap a bit of butter on them

Michael Harding: ... or hold the flame of a cigarette lighter close to the tick's backside 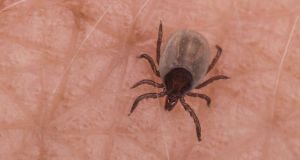 How do you get rid of ticks? Photograph: iStock/Getty

Last week in Donegal a man gave me a remedy for getting ticks out of my arse.

“Just slap a bit of butter on them,” he said. “It makes them slippery and they’ll fall off. That’s what we did as children, when we’d come in from the fields.”

But another man had a different remedy.

“Hold the flame of a cigarette lighter close to the tick’s backside, and he’ll go into reverse middling quick.”

And those were not the only cures I heard about last week in Glencolmcille, where I went with the camper van, to do the pilgrimage, or turas, as local people call it.

It took me four hours to complete the path, in the company of some pious Christians, stopping along the way at various standing stones, and at an old monastic site and a holy well, half way up the side of a mountain.

By the time we got to the holy well I had grown as devout as a Russian nun. I scooped a full bottle of water from the well to take home, to distribute drop by drop to the neighbours

The sky was blue when we set out from the Church of Ireland, an elegant building shining at the centre of the valley, beside a megalithic tomb and a standing stone from pre-Christian times.

In fact many of the standing stones along the path date back to a pre-historic era, long before Colmcille set his eyes on the waves at Glen Bay . Etching Christian crosses on standing stones that were already old, even in the 6th century, was an intelligent way of rebranding old truths. Although nowadays it’s entirely the memory of Colmcille that haunts the valley.

Halfway up the side of a mountain we stopped at the ruined walls of a church, and after circling the building three times I went inside and lay down on a slab known as Leabaidh Cholm Cille. I turned over three times, and then lifted a handful of clay from beneath the stone which I’m told can protect a house from fire. When I was done, the other pilgrims performed the same ritual.

“It’s better than house insurance,” a man said, as he folded the black crumbs into an envelope and dropped them gently into his breast pocket.

By the time we got to the holy well I had grown as devout as a Russian nun, and I scooped a full bottle of water from the well to take home with me, promising to distribute it drop by drop to the neighbours.

We all sat down and drank bottled water and ate egg sandwiches and one man told us a story.

For centuries the women of Tory Island were the keepers of this chalice, until it was robbed by fishermen from Scotland. But it only brought bad luck to people who drank from it because it had been stolen, so eventually it was returned to Tory and remained there until the 19th century when it vanished again; this time into the delicate hands of a local clergyman, who I presume didn’t trust the women of Tory with such a precious relic.

I don’t know if the story is true, but I suppose the great thing about religion is that facts always play second fiddle to a myth.

There was a lot of rascals with me who wanted to see heaven, but not many takers for renouncing the world

The final standing stone on our journey around the valley had a hole at the top, and in the old days devout pilgrims would gather at it, and renounce the world, the flesh and the devil before looking through the eye hole at the top of the stone in hope that they might see heaven.

There was a lot of rascals with me who wanted to see heaven, but not many takers for renouncing the world. So I stepped forward and placed my back to the stone and stretched out my arms three times and spoke my renunciation at the sky with as much fire in my belly as would terrify an infidel. And then I gazed through the eye at the top of the stone and indeed I saw heaven clearly. Because in every religion, heaven is exactly the same as the earth; when your eye has been cured of the jaundiced view.

In the distance the ocean sang as it did when Colmcille stood on the beach and turned his back on Ireland, just so he could contemplate those lovely waves. And the glen around me appeared so peaceful that I knew in my heart it was worth renouncing not just Ireland, but the entire world, for the sake of being there.