The last eight years of his life were the first eight of mine. My first words were uttered in a mimic of his north Longford drawl 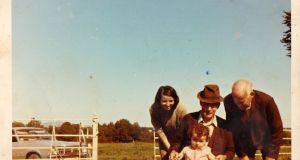 ‘My grandfather Mikey Tully (wearing hat) myself aged two, my mother Mary Tully and my granduncle Patrick Kelly, in Monaghan.’

Like Scout Finch, I cannot remember learning to read. My Atticus was my grandfather Mikey Tully. I perched on the arm of the chair as he read the daily paper from Curly Wee to the obituaries

The eldest of eight, he was born in 1896 into a small farm near the top of Cairn Hill, the highest point in Co Longford. The census of 1901 lists the family as Tally and indeed that variation of the name is still in use.

He and four of his brothers were cattle dealers and travelled across Ireland to fairs in Kilrush, Kilmehill, Ennistymon and Killorglin. Successful candidates for this career required quick wits, a good eye for livestock and an aversion to sleep and regular mealtimes.

Mikey Tully met Josephine Kelly at her family guest house in Monaghan. He had bought a pub in Longford some time previously for the princely sum of £240. A legislator of the time decreed that all pubs were to have names. My grandfather met a neighbouring solicitor who suggested that “Tally Ho” had a certain ring to it.

After marriage, my grandfather continued to travel, leaving Josephine to run the pub. Their first son Patrick died in infancy. Josephine was 28 when her son Michael was born. Tragically, she succumbed to a post-partum illness. My grandfather’s grief was compounded by the worry of bringing up his new son.

His brother Tommy had recently married the incomparable Bridie. To her eternal credit, she welcomed the baby to her new home. She raised him as a brother to her three subsequent sons. As a teenager, my father boarded in Newbridge College. After school, he too became a dealer, travelling Ireland buying and selling cattle.

As my father married young, I spent my formative years with my grandfather. The last eight years of his life were the first eight of mine. My first words were uttered in a mimic of his north Longford drawl. Like Scout, I can’t remember when the lines separated into words but the photograph on the kitchen window reminds me daily of the man who taught me to read.

Monica Lewinsky: ‘I’m not alone any more. For that I am grateful’
10