Trump visiting Ireland? ‘We should be on our knees with gratitude,’ he said

The residents of Doonbeg are putting up bunting and flags for the imminent arrival of US president Donald Trump who owns the near-by Trump International hotel and golf course. Video: Enda O'Dowd 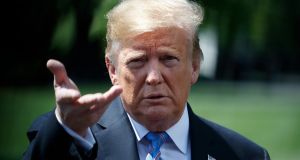 US president Donald Trump. ‘I wept when I heard he was coming.’ File photograph: Tom Brenner/The New York Times

I was walking around a supermarket in Mullingar last week with an empty basket, trying to remember what I came in to buy, when I bumped into a woman I recognised.

“Well the guards wouldn’t ask me that, sir,” she said.

She looked at my empty basket.

“You must have a small family,” she observed.

Her own trolley contained a weeks supply of processed foods, toilet rolls, cans of beer, and a gigantic box of crisps.

Later, at the checkout another woman stared at me.

“Are you the man from Cavan?” she wondered.

So I couldn’t resist using the phrase I had heard a few minutes earlier.

“The guards wouldn’t ask me that,” says I.

Unfortunately she actually was a guard, off duty, and just trying to be friendly.

We chatted about the Cavan vs Monaghan match, while our groceries were being checked out, but it crossed my mind that I had no tax on my car window and so I tried to get away from her when we got to the front door.

“Is that your car?” she asked, pointing at my Skoda.

“How did you know?” I wondered.

“I saw you getting out of it,” she replied.

“A guard is never off duty,” I joked, and I was terrified that her car might be parked next to mine.

“Actually I forgot milk,” I declared, turning on my heel and heading back towards the supermarket.

Not that there was any reason to be afraid of an off-duty guard, but when we were talking football she did admit she was from Monaghan, which didn’t help.

At home I laid out my messages on the table and discovered a smoked mackerel with a silvery orange hue staring at me from inside a vacuumed package. I tried to figure out how it got there. It certainly didn’t belong to the woman with the box of crisps; her trolley didn’t contain anything that might complement a smoked mackerel. So it must belong to the guard, I conjectured, and I probably put it in my basket accidentally when we were discussing the football at the checkout.

A man of such vision. Such grace. Such elegance and intelligence

The following morning the orange fish gave me a fright when I opened the fridge, because I had forgotten about him, and I began wondering if I should put him in the freezer for a couple of years.

I decided to phone the General because he’s an expert on smoked salmon.

“I have a smoked mackerel here,” I said, “and he looks very orange. He’s staring at me with empty eye sockets, and I don’t want him in the fridge in case he frightens the beloved, so I’m wondering would it be possible to freeze him.”

The General was in no humour to talk about fish.

“Do you realise that Mr Trump will be here soon?” he asked.

“So it is an enormous honour for our country,” he declared. “A man of such vision. Such grace. Such elegance and intelligence. And he has chosen to pay us a visit despite his busy schedule.”

“I hadn’t thought of it like that,” I confessed.

“Such charm and affability,” the General gushed. “Such condescension on his part, to grace us with his presence.”

He sounded breathless. Or at least someone else was panting in the background, as if they had just climbed a mountain.

“I wept when I heard he was coming,” the General continued. And the noise in the background began to sound suspiciously like a cat drowning, or another person suppressing giggles.

“Are you alone?” I wondered.

“I have the nurse with me,” he declared firmly. “She’s doing my bloods. But the point is,” he continued, “that we should be on our knees to this great personage, considering his generosity to Ireland, to Clare and sweet Doonbeg. Instead what do the journalists write about? Nothing but negatives. It’s quite unacceptable.”

He was winded with indignation.

“On our knees with gratitude,” he intoned, and I could hear his nurse echoing the phrase like a mantra, before the General silenced her.

“I must go,” he said abruptly, and the line went dead.

I decided not to give the mackerel to the cat. I was afraid that if I broke the seal and let air into the vacuum pack the smell might stink the fridge. And who could tell what effect a smoked mackerel might have on my cat’s digestive system. So the only option was to call the guards in Mullingar.