Michael Harding: I like to gaze at Claire Danes’ face in Homeland. Her survival is reassuring

Carrie Mathison is not just a mythic figure on the screen. She also survives inside me 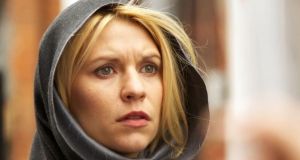 Every evening last week I watched an episode of Homeland before I went to bed. It’s not that there’s anything valuable in it, artistically, but I like to gaze at Claire Danes’ face. She plays the bipolar Carrie Mathison, ex-CIA agent, who suffers terrible stress from one episode to the next. And I get comfort from gazing at her face each night as it contorts in agony and torment, fretting about her child, or some monster in the wardrobe with a machine gun.

But thankfully she always survives. And that’s what comforts me, because she is the embodiment of compassion, and it’s awful to see bad things happen to her. Her survival is reassuring.

Other characters are satellites around her, but it’s her face that soothes me, like an icon of a holy virgin in metaphysical torment, or a saint struggling with the Devil.

Andrei Rublev, the 14th-century icon maker, might have said that nature sculpted her face beautifully, although he never met her, which is good, because if he had seen Netflix it might have distracted him from making all those icons.

She certainly reminds me of medieval saints on the walls of various cathedrals as the setting sun illuminates them with golden rings of ecstasy.

I suppose the human condition hasn’t changed much in six centuries. We still like to feel that mythic figures carry us through the dark. And that gods appear from time to time in human form. Carrie Mathison is not just a mythic figure on the screen. She also survives inside me.

And of course a little television before bedtime is like prayer. It winds me down and provides a sense of regularity in my life.

In Warsaw last year I was often amazed at the regularity of other folk in the apartment I was living in. The same ladies walked the same dogs at exactly the same time each morning. Even the same dogs pooed at the same spot each day.

The couple in the apartment above me went to bed at the same time every night. I could hear them pulling out a sofa bed at 10pm on the dot. In the morning they showered at 8.05am, just as RTÉ was presenting its synopsis of the morning newspapers.

Although it’s not just humans that enjoy regularity. I know a magpie called George who behaves like a clock. He lives in a spruce tree outside the house. Each evening at 6pm he sits on the roof to check the cat bowls beside the door.

I don’t know what he does for the rest of the day, because the spruce tree is so big that he could have a chip shop up there for all I know, but when I see him on the roof, I know it’s time to make the tea.

Charlie the black cat sleeps in the house, but Peabody the piebald cat never crosses the threshold. Yet they love each other and play together all day long. Each evening, Peabody comes to the door with Charlie, kisses him goodnight and then sits at the window for an hour gazing through the glass with loving devotion.

This dependence on Charlie mystified me for a long while until I realised that Peabody had impaired vision and could do very little without Charlie’s support.

The problem arises at feeding time. Charlie the Black likes wet food. Peabody the Piebald, only eats dry food. So two bowls are laid out. But Peabody won’t eat anything until Charlie eats first. So Charlie must nibble the dry stuff, to signify that it’s okay, before Peabody tucks into his supper.

If Charlie is already indoors, Peabody fasts. And that’s when George the Magpie hops into the frame. Peabody goes hungry, pining for Charlie, while George hops down to ground level and gobbles up the nuggets. And I worry that George might over eat and get fat, and be unable to fly, and then he might end up like me, with heart trouble.

One evening last week Charlie came in early. Peabody sat outside looking at George, because he knew there was another piebald beast flapping around on the patio, although he couldn’t be quite sure what it was.

George the Magpie looked slightly astonished at Peabody the Piebald, like they both might have been Cistercian monks in a former life.

And I turned on the television to watch Carrie Mathison struggle through more fire and brimstone, as she liberated each of us from yet another day of emotional turbulence in our own little worlds.

Coronavirus and carers: ‘I am so scared right now’
5