Keanu Reeves – do his ‘hover hands’ mean he respects women?

Recent photograph of actor with a fan has prompted mixed opinions 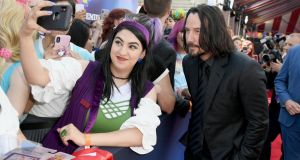 Keanu Reeves poses for a photograph with a fan at the premiere of Toy Story 4 in Los Angeles, California. Photograph: Kevin Winter/Getty Images

Most of us, female and male, have experience of being touched – not necessarily in a sexual manner – when we would prefer not to be. Personally, I don’t like it when strangers put their hands on me.

The odd arm touch from a colleague I don’t know all that well during a lively conversation is fine, but lingering touches? No. It should go without saying that the sort of groping physical contact that is the sole remit of career perverts is also deeply unwelcome.

However, some people are just more touch-led than others. I have a friend who touches everyone he talks to. His mixed gender siblings are the same, so it appears that this is just how they were raised – he is a hugger, even when meeting friends of friends, and will place his hand on someone’s shoulder (rather than the perfunctory shoulder tap) when politely asking them to let him by on the bus. I have got used to his physical brand of friendliness, which he expresses the same way with everyone, but I sometimes wonder if someone won’t misread his intent at some point, or just tell him right to his face to keep his hands to himself.

I thought about my friend last week when images of actor Keanu Reeves posing with female fans circulated online. In the photos, Reeves is doing the usual “arm around the person’s waist” celebrity photo pose, but his hand is blatantly hovering behind the women in the photos – he is very deliberately refraining from touching them. As is standard in internet culture, a variety of intense opinions followed from commenters, with many celebrating Reeves for respecting his female fans, and others saying that his choice of pose was directly influenced by #MeToo; proof that male celebrities need to engage in this sort of behaviour in order to avoid potential accusations of sexual misconduct and expensive law suits.

Both these interpretations are possible, as is the idea that Reeves, who is enjoying a career high and moment as the universally beloved golden good guy of Hollywood, has always seemed unique and even a little awkward. Perhaps he doesn’t want to touch the strangers constantly approaching him for photos for mysterious hygiene reasons of his own. Perhaps he is not someone who engages comfortably in physical contact with people he does not know well. Only the actor himself knows the reason for his slightly unsettling looking “hover hands” in photographs. It is, after all, Reeves’s own choice what he does with his body.

It seems, however, that labelling his behaviour “respect” is just as bizarre as deciding it is borne entirely of suspicion of litigious women. Intent is very important. I accidentally brushed my hand against a woman’s bum this morning on a London commuter train due to the crush and my own general clumsiness. I apologised immediately and felt quite uncomfortable. The woman ignored me, as people on London transport tend generally to ignore one another.

Other people’s intent can be difficult – if not impossible – to determine, but I can promise here and now that I did not intend to inappropriately touch a woman on the train, and certainly did not do so out of a lack of respect for her autonomy or personal space. These things can happen on overcrowded public transport, but the rules are unquestionably different for men. For a variety of very understandable reasons, women are less willing to give men the benefit of the doubt.

I cannot help but think that those celebrating Reeves’s refusal to make physical contact with female fans as “respecting women” are advocating emulating the mixed gender standards of the most puritanical forms of religion. Groping weirdos are odious on one end of the scale, and hover hands are unsettling on the other.

Most of us live somewhere in the middle, simply trying to gauge the requirements and standards of the people in front of us with respect and good will. We do not need to laud refusal to engage in human physical contact with women. It would be better to give one another the benefit of the doubt, communicate our discomfort and respect that of others where necessary, and just take the damn photo.

Good news: a great tale of community support and five more things that made us happy today
10

Róisín Ingle: How I met Matt Damon. And it wasn’t in Dalkey
Real news has value SUBSCRIBE