Michael Harding: I see my late mother in the mirror since I went on heart tablets

Now that I have begun to slow down myself, I find her everywhere 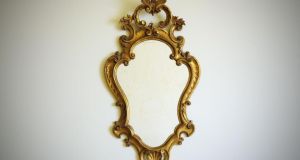 I was in Aldi last week looking at bicycle locks, frying pans and lamps for camping tents. I don’t need any of those items but it’s amazing what surprises a supermarket can come up with from one week to the next.

All I needed was butter, rapeseed oil and a little stir fry veg, before heading to the queue.

I was at check-out number four and then two women came in behind me. One of them had an awful lot of crisps and biscuits, and the other had only one carton of soya milk and a few fresh vegetables.

The pleasure of a supermarket queue is that I get to see other peoples stuff. I pass the time trying to guess whether they take enough exercise, how many children they have, or if they watch Netflix.

An intercom voice announced that check-out number four was closing; too late for one woman heading towards our queue, but she joined us nonetheless.

“Well,” says I, “you might do that in Dunnes Stores and get away with it, but not in Aldis.”

And sure enough when the woman got close to the check-out, she was told to go to lane three.

“I have already put my items on the counter,” she said.

Ironically the woman ahead of me had picked a bruised pear. Eventually an assistant arrived to replace it. Which took so much time that all the people at the other check-outs had gone through while we were waiting.

“You should have gone to lane three,” I joked. But by the red in her cheeks I could see she wasn’t amused.

Not that her face was half as red as my own got, yesterday, when I was in Belcoo recording a little clip about Brexit for TV3. It was a lovely May morning as we walked beside the lake. The producer with her clipboard, a cameraman with a huge camera on his shoulder, and me, rejoicing in the beautiful sunshine.

But when I got home and looked in the mirror my face was like a bursting raspberry. And since my face doesn’t usually burn in the sun, I suspected the heart tablets might be causing a side effect.

And all I could think of was my dear mother, as I scrutinised the image in the mirror. It was her looking back at me.

An encounter with the mother’s ghost is part of every old man’s journey. Patrick Kavanagh wrote a beautiful poem about the subject.

“I do not see you lying in the cold wet clay of a Monaghan graveyard,” he wrote, and then he listed all the beautiful places he sensed her presence. Although he never mentioned the bathroom mirror.

I’ve been encountering mother in the mirror ever since I went on tablets for the heart.

Although she doesn’t just appear in the bathroom mirror. Recently, I’ve been seeing her everywhere.

A few weeks ago I was in the foyer of the Sliabh Russell Hotel and I saw a walking stick leaning against an armchair in the foyer. It was black with a silver top, like the stick my mother used as she made her way to the kitchen sometimes, when she was constantly breathless. She’d boil her egg, put it in a cup, and then return to the sofa in the television room.

Although she never used the stick in public, because she didn’t want people to think of her as feeble.

I remember her standing at her front door one day, where I had parked the car. We were heading for town but she clung to the wall.

“Just wait a minute,” she said, “till I catch my breath.”

I’m ashamed now to consider how little I understood her health difficulties, and how impatient I was on those endless afternoons when she’d walk around Dunnes Stores in slow motion, as she fingered every variety of yoghurt on the shelf before deciding on the very same brand as she had bought the previous week and every other week.

But then a wonderful doctor suggested her shortness of breath might have something to do with the heart, and so she got a stent and lived another twenty years.

But I was always rushing her. And now that I have begun to slow down myself, I find her everywhere. Especially in the bathroom mirror as my head glows like a radioactive beetroot. There she is, fragile and confused, every morning, still watching me across all the years.