Gwyneth Paltrow’s Christmas gift collection is out. It doesn’t disappoint

Hilary Fannin: It includes a perfume rollerball called ‘This Smells Like My Orgasm’ 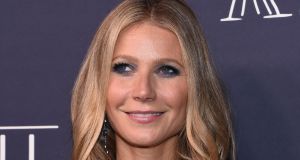 Gwyneth Paltrow: Goop’s Christmas gift collection is, as usual, a catalogue of corporeal craziness that does not disappoint. Photograph: Chris Delmas/AFP/Getty

With just a little more than a month left until “the big day”, and given the obstacles that Covid-19 will inevitably place in the way of rampant festive consumerism, I thought you might like a hand preparing your Christmas gift lists.

“Christmas?” I hear you roar. “Christmas? What are you talking about, woman? How can it be Christmas? I haven’t got out of my pyjamas since March! I’ve been slumped in front of Netflix for so long I’ve got tubers growing out of my . . . ears.”

Regardless of the state of your mental preparedness, or indeed the flexibility of your wallets, it is that time of year when we’re invited to turn, with bated breath and pockets full of shiny dollars, to a woman who might appear to be the flakiest fairy on the tree but is, in truth, one shrewd seasonal operator.

Yep, Gwyneth Paltrow’s Christmas gift collection is now available on her lifestyle website, Goop, and, as usual, the catalogue of corporeal craziness does not disappoint, especially not in the “gifts for lovers” section.

Don’t look at me, mate: if you want to spend your cash sculpting a spare penis, be my guest

Last year, you may remember, Gwynnie presented us with a candle called This Smells Like My Vagina, helpfully managing to solve the perennial problem of what gift I should buy for my mother-in-law.

Apparently, Paltrow’s vagina-scented tapers flew off the shelves in 2019; however, despite a year that many of us would like to forget, she has not produced a comparable wick-burner for 2020 named This Smells Like My Scrotum, which does seem like a missed marketing opportunity.

She has, though, you’ll be pleased to hear, developed a  perfume rollerball called This Smells Like My Orgasm ($75). This “tart, sexy scent” is based on her “wildly popular” candle of the same name.

Now, those more literal thinkers among us may be scratching their noggins and asking whether feelings do, in fact, have an olfactory signature. By way of answering that metaphysical conundrum, I’d like to point out that, as a species, we’re occasionally moved to remark that an idea stinks.

It may be, however, that you’re already up to your back teeth in scented sensation and you’d rather gift your loved one something more hands-on and crafty this year. Well, how about Clone-A-Willy, an at-home kit which, according to the marketing blurb, enables the two of you to make an exact, vibrating silicone replica of your partner’s “package”?

Don’t look at me, mate: if you want to spend your cash sculpting a spare penis, be my guest. I’d like to point out, however, that the kit offers just three colour options for the DIY phallus – dark, medium and light – whereas actual Play-Doh, which retails at a quarter of the price, includes vibrant shades of shocking pink and Kelly green.

As might be expected, the Goop website is also home to silky thongs, sticky emollients and a range of vibrators, a veritable colony of them inspired by bunnies – pink bunnies, purple bunnies, bunnies with perky ears, and one bunny with a bullet in it for extra firmness.

Unfortunately, or so I read, the making of the audio-erotic series ran into lockdown restrictions. This interruption to the schedule resulted in the cast, unable to meet in a recording studio, having to self-tape their simulated orgasms in their wardrobes, or whatever intensely private bit of their homes they could find to secrete themselves away in.

This turn of events led to a bit of a backlash from Demi’s fans, who weren’t at all happy with a series of pictures the actor posted on her social-media account. In the pics, the Indecent Proposal star was captured recording her role while sitting on a small couch in her carpeted bathroom, next to a toilet, a bath (hardly the dirtiest of Dianas then) and (for reasons that remain unexplained) a replica of Joan of Arc.

It was the dark-brown carpet on the bathroom floor that caused the controversy, with some fans pointing to the potential sanitary issues raised by Demi’s choice of decor and wondering what happens when the toilet overflows.

The all important thing, apparently, are the acoustics. Who knew that Demi would find the resonance and timbre she needs to convince as a woman escaping a carefully curated life by being up close and personal with the toilet bowl?