Saeb Erekat obituary: A passionate negotiator for the cause of Palestine 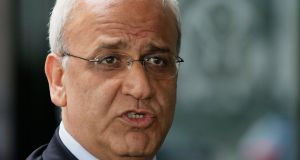 Saeb Erekat pictured speaking to the media after a meeting in Washington, DC, US, in July 2008. Photograph: Alex Wong/Getty Images

Saeb Erekat, a senior Palestinian official and negotiator who passionately advocated for the establishment of an independent Palestinian state as a resolution to the Israeli-Palestinian conflict, died on Tuesday at a hospital in Jerusalem. He was 65.

Officials at the hospital, Hadassah Medical Centre, attributed the death to Covid-19. They said he was admitted in a critical condition with the disease on October 18th and required immediate ventilation and resuscitation; he had previously had a lung transplant. They said he experienced multiple organ failure.

Although his public statements sometimes gave him the image of a firebrand, Erekat, a western-educated diplomat, was liked and respected by many of his US and Israeli counterparts, who found him frank and knowledgeable.

But his life’s ambition of helping to bring about Palestinian statehood and an end to Israeli occupation eluded him, to his great frustration.

“I’m not finished with what I was born to do,” he recently messaged Tzipi Livni, the former Israeli foreign minister and a negotiating partner.

Mr Abbas declared a three-day period of mourning, with flags to be flown at half-staff, following his death.

“The departure of our brother and friend, the great fighter, Dr Saeb Erekat, represents a huge loss for Palestine and our people, and we feel deeply saddened by his passing, especially in light of these difficult circumstances facing the Palestinian cause,” Mr Abbas said on Tuesday in a statement carried by Wafa, the official Palestinian news agency.

Erekat, who was known for occasional emotional outbursts, negotiated with a determination that his Israeli counterparts sometimes found obstructive. As the representative of Arafat and Abbas, he stuck to fundamental Palestinian principles and hardline, legalistic positions, at least in public, balancing competing imperatives to make progress towards an agreement without being seen as capitulating to Israeli demands.

When he burst onto the international scene in 1991 as the deputy head of the Palestinian delegation at the Madrid peace conference, he stood out amid the sea of dark-suited diplomats with his black-and-white checked keffiya draped around his neck. The scarf, a symbol of Palestinian resistance and solidarity, was viewed by the Israeli delegation and others as a provocative publicity stunt.

But the Madrid conference, brokered by US secretary of state James Baker, was the first time that Palestinians participated openly in direct negotiations with Israel.

Separate, secret bilateral talks led to the Oslo accords, a series of interim agreements between the Israelis and the Palestinians, starting in 1993.

Erekat was instrumental in negotiating the Oslo II Accord in 1995, the Hebron Protocol in 1997 and the Wye River Memorandum in 1998, all of which transferred Israeli-controlled territory to the Palestinians. He was responsible for drafting the texts of the agreements on behalf of the Palestinians. At other times, though, he was sidelined by his bosses, who preferred to negotiate through back channels.

The Oslo process, a source of great optimism at the time, never arrived at its intended conclusion: a final and comprehensive peace agreement that the Palestinians had expected would be between two sovereign states, Israel and a Palestinian state in the West Bank and the Gaza Strip, with East Jerusalem as its capital.

Negotiations for a permanent deal continued on and off until 2014.

A loyal member of Fatah, the mainstream political faction led by Mr Abbas, Erekat resigned several times from various positions to protest a policy or make a point, but always returned to the fold.

In 2015, Erekat became secretary general of the Executive Committee of the Palestine Liberation Organisation, the umbrella group representing secular Palestinian factions. It was the second-highest post in the organisation after the chairmanship, held by Mr Abbas.

“Today, we mourn the loss of a dear colleague and a Palestinian patriot; someone who loved life and fought hard to secure a life of freedom for himself and his people,” said Hanan Ashrawi, another senior Palestinian official who worked with Erekat for decades.

Throughout many years of negotiations, the Israelis and Palestinians have accused each other of intransigence. But Erekat constantly sought engagement with the Israelis and formed deep friendships with several of his interlocutors.

One of them, Ms Livni, said that their talks were always honest and that when they disagreed, which they did frequently, it was in an atmosphere of mutual respect. Erekat was proud to represent the Palestinians, she said, and was admired for his deep knowledge of the issues.

“He viewed it as his destiny to try to achieve peace,” she said.

Erekat was less popular among other Israelis, however. They castigated him for campaigning to sue Israel for war crimes in the International Criminal Court and for accusing Israel of carrying out a massacre in the Jenin refugee camp in 2002, an allegation that turned out to be unfounded.

In recent years, as his health deteriorated, he saw his diplomatic achievements cast aside and his goal of statehood slip further away.

The stalemate between the Palestinians and Israel has only hardened under the Trump administration, which has openly sided with Israel.

Saeb Muhammad Erekat was born on April 28th, 1955, the sixth of seven brothers and sisters, to a family from Abu Dis in the Jerusalem governorate, which was then under Jordanian administration. He grew up in Jericho in the West Bank. His father, Muhammad Erekat, lived in the US for a long time as a businessman.

Erekat was 12 when the Israeli military occupied Jericho, along with the rest of the West Bank, Gaza and East Jerusalem, in the wake of the 1967 Arab-Israeli War. He described that moment as the end of his childhood and the beginning of his awakening as a Palestinian.

He told interviewers that he was first arrested by Israeli forces at 13, saying variously that he was detained for writing anti-occupation graffiti or for posting flyers and throwing stones.

At 17, he travelled to California, where he earned bachelor’s and master’s degrees in political science and international relations at San Francisco State University. He returned to the West Bank in the late 1970s and became a lecturer at An-Najah National University. He later earned a doctorate in peace studies from the University of Bradford in Britain.

Erekat is survived by his wife Neameh, two daughters, Dalal and Salam, and two sons, Ali and Muhammad.