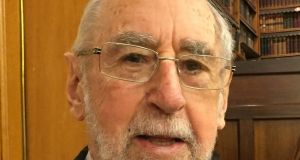 Colin Murphy: a life-long journey of encounters and dialogue with those of different Christian traditions, and later those who experienced hurt and harm through violent conflict, and later again as a result of racial and religious intolerance

After a lifetime of working for peace on the island of Ireland, Colin William Murphy died quietly in Newcastle, Co Wicklow, this year.

Born in the heart of Protestant East Belfast in 1936, he had a strong curiosity and drive to encounter difference and diversity in a world he described as growing up “on a Protestant street, going to a Protestant school and worshipping in a Protestant church”, in a place and a people divided.

He met his wife Margaret at a 21st birthday party and thus began a strong partnership of 55 years where together they set out to “encounter the other”, first through PACE (Protestant and Catholic Encounter), a process they both described as enriching and life changing.

This started a life- long journey of encounters and dialogue with those of different Christian traditions, and later those who experienced hurt and harm through violent conflict, and later again as a result of racial and religious intolerance.

He always said that engaging with other cultures and traditions enriched his own life, and he did that at a time when reaching out to the other was neither encouraged nor seen as safe to do.

With a dry Northern humour, he often recounted how as a Boys’ Brigade leader, he brought a young Catholic to a Friday night meeting, only to hear the following day that he was going to be denounced by the Rev Ian Paisley for his ecumenical gesture in a local magazine. He recalled waiting to meet Rev Paisley after his service at Martyrs Memorial Free Presbyterian Church on the Ravenhill Road to challenge his threat. He was never denounced!

In 1975, he moved with Margaret and their two small children to Blackrock in Dublin after being offered a good business opportunity.

However, his heart was rooted in enabling people from different traditions and cultures to understand each other better.

He followed that commitment through the Irish Council of Churches, the Corrymeela Community and a lifetime given to work of the Glencree Centre for Peace and Reconciliation. Initially as a member, then chief executive, chairman, and adviser, he was acutely aware that maintaining a safe confidential space that would enable people to listen to each other without judgment and fear was crucial. He recognised the value of having a residential centre at Glencree where people developing relationships over shared meals, walks, talks and conversations.

A good organiser, he brought a strong set of business and organisational skills to Glencree at a time when it was needed.

A long supportive friendship with Una O’Higgins O’Malley, one of Glencree’s founders, saw them navigate and provide space for many back-channel conversations and informal diplomacy at a time when any kind of public engagement between perceived enemies would not have been possible. He contributed greatly to Glencree’s reputation as a trusted peace-broker.

He founded the Dutch Northern Ireland Council which worked to bring people from both sides of the Troubles to the Netherlands for dialogue workshops.

This began a lifelong friendship with André Lascaris, a Dominican monk, and both had common interest in the French philosopher René Girard.

Colin was awarded an MBE in 2006 for his contribution to peace between these islands.

He recognised that violence had not disappeared from this island and that there was a continuous need “to mind the hard-won peace”. Colin lived his five golden rules for conflict transformation: stay in the game, don’t escalate, don’t scapegoat, go the extra mile, and do the unexpected. He was involved in the publication of two books with his daughter Lynne, Untold Stories and Glencree – A Place of Peace.

Colin is survived by his wife Margaret and his daughters Lynne and Sheelagh and his many grandchildren.