What would my father’s hologram have said at my 40th birthday bash?

Hilary Fannin: Kanye presented Kim with something every woman simply must have 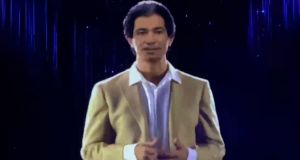 In a week dominated by the election in the US, I tried, really I did, to write about something else. And so, scrolling through the spent column inches, baggy-eyed and bleary from watching the rolling news, I came across another story also pertaining to that bruised nation.

Yep, it was Kim Kardashian West’s 40th birthday recently, and to celebrate the occasion she and an intimate cohort from her apparently Covid-tested inner circle flew off in a hired jet for a million-dollar birthday bash on a private Tahitian island once owned by Marlon Brando.

There, Kim and 30 or so awfully close friends were photographed frolicking in the azure waves wearing Day-Glo swimwear and rose-tinted sunglasses. The shades were a requirement, one is tempted to imagine, not only to obscure the glare of the sparkling Tahitian sun but also to dim the wrath of a dissenting corona-hobbled public back home.

I don’t suppose Ms Kardashian or her party planners, when they were filling the guests’ goodie bags with loose Smarties and leftover Rice Krispie cakes, had quite factored in the vitriol heading their way from skint and scared former fans, ordinary humans tethered to the grim realities of the virus and unable to charter a plane to paradise.

I was mildly disappointed myself not to have been invited to the festivities, but I’ve heard through the grapevine that Kim, a woman with enough pairs of tightly fitting leather trousers to stretch from Kinnegad to Kansas, can’t really take too much competition in the lovely-bottoms department.

Let’s face it, my own saggy and sunless posterior, which I’ve been sitting on for much of the past week while staring agog at the box, and which I’m now keeping cleverly hidden under my second-hand corduroy coat, might just have blighted her day.

Kim’s husband, the American rapper, record producer and fashion designer Kanye West, a late runner in the US presidential election who had his name on the ballot in 12 states and is now vowing to be back in 2024, wasn’t much in evidence in the birthday photographs that Kimmy posted across her social-media platforms.

Maybe Kanye was roaming his Wyoming ranch, practising his future presidential inaugural performance. Or maybe he was too busy to go to Kim’s party because he was banging his head in despair off the modernist architecture that encapsulates the seductive simplicity and wabi-sabi aesthetic pervading the man’s many minimalist homes.

I don’t know about you, but I’m never watching another US presidential election again. In 2024, when the American public attempt to elect their 47th president, I plan to go off grid. I’m going to hole up in a crumbling cottage with zero connectivity and gently insert my noggin into the woolly backside of a toothless sheep.

Celebrity candidates Kanye and Kim can cartwheel over the Grand Canyon in matching pairs of crystal-cut Louboutins or kayak over Kentucky in nickel-plated knickerbockers, but I’m still not going to tune in. I just can’t take it any more.

Anyway, you may or may not know what it was that Kanye West gifted his beloved wife to mark the occasion of her 40th birthday. Was it a string of vivid pink diamonds, I hear you ask. Was it a Tibetan mastiff replete with a ruby-studded collar? Was it a purring white lion cub or a prancing Arabian horse? Oh, hang on, I know! Was it Iceland?

Why, no, you unimaginative louts. Kanye presented Kim with something every woman simply must have to help navigate her fifth decade: a holographic resurrection of her dead father.

By all accounts, the late Robert Kardashian, one of OJ Simpson’s defence attorneys, who died of cancer in 2003, both spoke and danced in his holographic resurrection. Expressing pride in his daughter’s not inconsiderable personal and professional achievements, he also gave a great big ghostly thumbs-up to her husband, describing him as the “most, most, most, most, most genius man in the whole world.”

That must’ve been good to hear, eh? Nothing like a bit of paternal poppycock from beyond the grave.

I shudder to think what my own father would have said if we’d reconstituted his ashes and hauled him out of the waves to deliver self-penned testimonials at my own 40th birthday party. I certainly can’t see him dancing to Sugababes, but once the Paddy was flowing he could be a convivial enough guest.

It’s tempting to wonder what all our family ghosts would make of the masked and uncertain world we now live in; maybe the wisest idea is to let them rest in peace.