Hilary Fannin: I’m tempted to house a Covid puppy, but a dog is for life, not just for lockdown 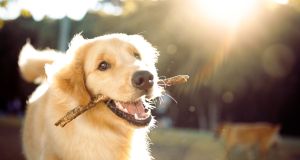 The decision to share your life with a bottom-sniffer is not to be taken lightly. Photograph: iStock

“It’s so good to have another beating heart in the room.” Two friends, unknown to one another, said this to me, in precisely the same words, in a single week recently. One lives alone, the other has a partner who is out all day, and they were both recounting their joy at having recently acquired a dog.

If Covid is decimating our working lives, stripping us of a social life and generally blanketing our mood in cold tapioca, then maybe the antidote, for some, is the acquisition of a growler.

“A dog is for life, not just for a pandemic!” I hear you roar. And yes, you’re right, of course – the decision to share your life with a bottom-sniffer is not to be taken lightly.

I read recently that, over the past two months, alongside the Covid-year demand for dogs, there has also been a 68 per cent surge in the number of people wanting to surrender them. The article illuminated this statistic with the story of a shivering terrier – subsequently named Beans – who was found tethered to a lamppost near a doggy shelter.

Anyway, I sat under an awning in my old mate’s inner-city backyard the other day, eating cheese and talking about his newly acquired rescue puppy.

He’s a sweet dog, eyes like rock pools and great big paws that make him look like he’s wearing somebody else’s slippers. The adoption process, my friend explained, wasn’t simple – not only did he himself have to be vetted and approved but also the puppy had to spend time being socialised in a foster home prior to moving in.

My mate’s hitherto tasteful home was, I noticed, now littered with puppy accoutrements, including a doggy bike seat which meant they’d be able to cycle to the Phoenix Park together and startle at the falling acorns.

I looked at my friend over the rim of our coffee mugs; he seemed, for the first time in a while, to be happy.

When, a couple of decades ago, we shared a flat, trying to work in theatre or traipsing around the city looking for a light, we’d stay up late, smoking strong cigarettes and sitting around our coffee-stained kitchen table tentatively anticipating our futures. We used to keep a bottle of absinthe under the sink. But even if we’d drained the contents, I don’t think we could possibly have imagined this masked and uncertain future.

Funnelling love into a puppy is no bad thing in these times, and when I drove away from my friend’s funky street, I was leaving him in the company of a creature that clearly adored him.

On the way home, sitting stalled on the quays, I thought about significant dogs in my life. There were three of them.

When I was a small child there was my father’s lover’s dog, a flighty golden spaniel, snappy and moody (much like its mistress), which I used to play with in empty rooms.

Sammy ended up under the wheels of the local bus. That was heartbreak

Then, in adolescence, living alone and adrift with my parents in straitened circumstances, I was gifted a dog of my own. Sammy came from a friend of my father’s, a charming man who, having survived the war in a submarine, had ended up with an unhappy American wife and a cottage outside Longford.

The puppy was a wild and magnificent Labrador cross, a passionately enthusiastic canine who once ate our landlady’s hat and whom I loved more than anything in the universe.

Not long after the hat-eating debacle, Sammy ended up under the wheels of the local bus. That was heartbreak.

Later, we moved home again and found ourselves in possession of a spaniel puppy called Dusty, a nervy house dog with drooping pink eyelids and cankerous ears, whom I tried and failed to love.

One night, when I slipped out for an illicit smoke on the cliff path, Dusty followed me. He must have got lost. And although I looked for him that navy-blue night, the sea pounding in my ears, I failed to locate him. The next morning my mother found his body lying on a pavement about a mile from our new and, as it turned out, temporary abode.

Back in the traffic jam, the cars began to move and the quays temporarily unclogged.

I’m tempted, but I won’t try to house a Covid puppy. Like the man says, a dog is for life, not just for lockdown.