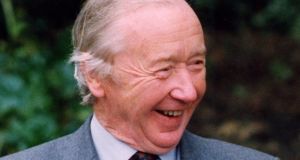 Frank Plunkett Dillon: many of the most successful businessmen and entrepreneurs of his generation turned to him for advice

Frank Plunkett Dillon, who died on May 16th last in his 92nd year was, for most of the second half of the 20th century, one of Ireland’s best-known and most successful solicitors. He was a valued and trusted adviser to many of the successful businessmen and entrepreneurs of his generation. They enjoyed his company, his acerbic wit and his storytelling. He was a true and loyal friend and mentor to many of those he worked with during his long career.

Not only was Frank a successful solicitor but was a valued member of the board of directors of a wide range of companies, public and private.

He and his father were instrumental in encouraging and supporting many small Irish indigenous companies in the 1940s and 1950s to seek a listing on the Dublin Stock Exchange with a view to raising capital and many of these companies became well known over the subsequent years. Foremost among these was Castle Sand Company Limited, incorporated in late 1940s by Frank’s father, John, for Tom Roche snr. This was the forerunner of Roadstone Limited and subsequently of CRH plc, now the largest Irish multinational company and one of the largest companies in the world in construction materials.

Frank advised Tom in his many other business ventures including on the necessary compulsory purchase orders and enabling secondary legislation to establish the East Link Bridge and the Western Parkway Bridge, now so integral to the traffic infrastructure of the greater Dublin area that it is difficult to envisage a Dublin without them.

Frank’s father, John Plunkett Dillon, had taken over the solicitor’s practice of his father-in-law, John L Scallan, in the early 1920s and developed a practice based largely on business and corporate law and when Frank qualified as a solicitor in 1955, he joined his father and continued its development, merging it with another successful firm, Ryan and O’Brien in the early 1960s to become Ryan, Scallan and O’Brien, and in 1965 merged that firm with Thomas Gerrard and Co to become Gerrard, Scallan and O’Brien. which operated in Hainault House on St Stephen’s Green until 2003 when it merged with Arthur Cox, Frank having retired a few years earlier.

Interestingly, Arthur Cox had been a colleague of Frank’s father, John, when they were both young solicitors in John L Scallan and Company before Arthur left to establish his own firm in the early 1920s.

Frank did not immediately study law as, after leaving school, his father enlisted him in the British Army (with the encouragement of Fr Matthew from Glenstal Abbey where Frank had been at school) and sent him to a recruiting office near Belfast. Frank never discovered for certain whether it was as punishment for some misdemeanours or to curb his mischievous nature. Fortunately, that adventure did not last very long as it was soon recognised by all that he was not military material, and Frank came south again and spent a number of years in Cork, working in the furniture business. While in Cork, Frank made many lifelong friends in all walks of Cork business, social and sporting life. Frank eventually resumed the path to his destiny, enrolling in Trinity College and quickly qualifying as a solicitor.

In 1954, he met Susan Clarke who had come to study in Trinity from Staines in Middlesex. Frank and Susan married in 1956 and had a very happy marriage for more than 60 years.

Frank had grown up in the family estate at Ludford Park in Ballinteer in what is now Wesley College and after early education in Xavier School, went to Glenstal Abbey in Co Limerick, where he excelled in sport, playing at outhalf on the first Glenstal team to play in the Munster Schools Senior Cup. He continued his interest in sport and was a single-handicap golfer for most of his life. Frank was honoured with the captaincy of Milltown Golf Club in 1975, and at one stage was a playing member of four golf clubs, including Connemara Golf Club in Ballyconneely, close to his lovely holiday home where he and his family spent many happy vacations. Frank was a life member of Ballyconneely, having been one of the early supporters of the course development in the 1970s.

Above all however, Frank was a family man, and he and Susan had five children who have all been successful in their respective careers and he took immense pride in their various achievements.He also enjoyed his 10 grandchildren and delighted in watching them grow and develop into fine young adults. Frank will be sorely missed by Susan, who cared for him patiently and lovingly during his long debilitating illness, and by his family: Emma, Julian, Joanna, Annabel and Nicholas and their partners and children.