Anxiety: I wake up sweating worried about next week

Laura Kennedy: In the run up to a challenging week, I'm having the Leaving Cert dreams again 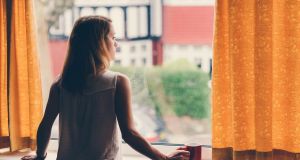 We can feel anxious without having a condition termed anxiety.

Anxiety is difficult to navigate. It is a state of mind, or of being, but it is now considered a psychological condition in a way that it never was before, though of course not in every case. We can feel anxious without having a condition termed anxiety. Historically, what we would now think of as anxiety was a conflation of several behaviours or now archaic or non-existent conditions, like hysteria, in which Freud was an expert at the beginning of his therapeutic career (Freud being interested in something is generally a bad omen for it).

Bad “nerves”, a condition historically associated like hysteria mostly with women, was another articulation of what we would now call anxiety. Undoubtedly the most delightful example of that condition in literature is the matriarch in Jane Austen’s Pride and Prejudice. Mrs Bennet is a joke; a self-indulgent narcissist, but her anxiety makes sense – she is portrayed as selfish and dim for trying to marry off her daughters and getting in a flap when things go wrong, but she has no other means of livelihood.

Putting aside the obviously gendered overtones of anxiety as it has been considered through history (that topic would make a column of its own), we can all recognise ourselves in portrayals of anxiety, be it the exuberant, outward-pointing Mrs Bennet type, or the internalised panic and fear which is probably more widespread today.

I am worried about next week, and as I write that phrase, I’m struck by how absolutely banal it is. So many times throughout our lives, we have all thought I’m worried about next week. Next week, on the eve of the event that worries me, I will be worried about tomorrow. I am facing into something toward which I have been working for years; the culmination of effort and labour and tears; the culmination of working on something at which I am hopefully better now than I was when I started. With so much pressure oriented around one event – it doesn’t really matter what it is, just insert the upcoming thing you’re afraid of and invested in and you’ll know the feeling – I have begun having the Leaving Cert dreams again.

we have all poured our fear out in sweat in the oppressive silence of our darkened beds, though the Leaving Cert dream may vary

I know things are getting rough when I dream myself back at that little desk, but at my current age, suddenly having to take the exams again when I know I haven’t revised in well over a decade. In the dream, I cannot say this to anyone. I know that I have to sit through it silently, or I will be found out for the fraud I am. In the dream, I am small and lost and painfully conscious that things will not be alright.

I wake up sweating, my heart thrumming against my chest like a hummingbird’s wings, and as the rich detail of the dream dissolves into the darkness around my bed, all that is left is the certainty that I should be very, very afraid of what is to come.

This scenario is spectacularly non-unique – we have all poured our fear out in sweat in the oppressive silence of our darkened beds, though the Leaving Cert dream may vary. Perhaps you are naked in yours. I have a friend who, in his version, raises his hand for a pencil only to see a malevolent goat in the corner of the room eating all the spare pencils out of a wheelbarrow. Even Freud wouldn’t touch that one. We’re all different.

The point is – where on earth can you go from there? That state of mind, I mean, not the goat dream. When I’m sufficiently worried about something that I start to consider moving to Majuro and starting a fruit stall, I always think again of Seneca’s letter On Groundless Fears.

“What does it avail to run out to meet your suffering?” he asks, and I wonder if I do it so that the failure I fear won’t blindside me if it does indeed come. If we predict we are about to sink, then at least we might look less stupid when we do. Of course, things don’t work this way. We simply increase our chances of failure by placing our attention on fear rather than preparation. Freud might disagree, but the dreams are not unbidden truth – they’re just nightmares. Next week will come and go.