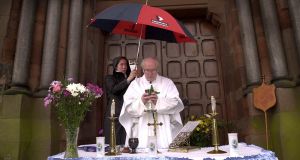 Fr Des Wilson during an outdoor Mass in the rain at St Joseph’s Church, Belfast, in 2001. File photograph: William Cherry/Pacemaker

Fr Des Wilson, who has died in his native Belfast in his 95th year, believed the Word of God could never be silent in the face of oppression, injustice and suffering. He sought to apply the ideas of liberation theology to the North, supporting and empowering marginalised communities, and acting as a voice for the voiceless.

He lived out his beliefs, spending spent half a century in Belfast’s Ballymurphy estate, among the North’s most deprived, and one of the areas which suffered worst from the Troubles. There he played a role in community development, establishing projects to provide employment in the area. He suffered, finding himself for years outside the official Catholic Church.

He played a significant role in providing adult education. He wanted an education that did not just provide qualifications and open career paths, but was psychologically liberating.

Conway Education Centre in West Belfast, based in a disused mill of the same name, is one memorial to him. By the early 1980s his Ballymurphy home became too small for the many classes he organised. They moved to the mill, and now offer a range of vocational and non-vocational courses with almost 1,000 students.

His personal probity was so recognised that he was accepted as a mediator in feuds between the Provisional and Official IRAs in the 1970s, and was able to broker permanent peace. He also helped bring about the ceasefires in the 1990s.

He did not shirk unpopular stances. In the 1970s he refused to condemn the IRA. Later he said the conviction of former Real IRA leader Michael McKevitt for directing terrorism was unsafe. He also publicly visited and supported a Ballymurphy couple which had a very bitter falling out with Sinn Féin, leading to a picket on their home.

Francis Desmond Wilson was born in July 1925, youngest of five sons to William Wilson, a publican and native of Co Cavan, and his wife Emma (née McAvoy), a native of south Co Down. He spent his earliest years above his father’s pub in Belfast city centre, before the family moved to a house in the suburbs.

He attended primary school locally, then received secondary education at St Malachy’s College. During his time there Belfast was blitzed in April and May 1941. Almost 1,000 were killed. The carnage he saw was a factor in his deciding on the priesthood.

After secondary school he entered the seminary at St Malachy’s, while studying English and Philosophy at Queen’s university. He proceeded to St Patrick’s College, Maynooth, being ordained in 1949 for the Diocese of Down and Connor.

After ordination he served as chaplain in Belfast’s Mater hospital, then spent 15 years in St Malachy’s as spiritual director. Former pupils remember him as fair, and able to play jazz excellently on the organ.

Life changed in 1966 when he was moved to St John’s Parish in West Belfast as a curate. He had come from a comfortable background and in Ballymurphy, he was shocked by the poverty, the poor housing and the treatment of women. Unusually for a priest at the time, he moved into a terraced house in the estate. He found the Catholic Church unable to respond to the multiple problems people were facing. That inability worsened as the Troubles erupted.

By 1975 relations with his bishop had broken down and he resigned, but continued ministering in Ballymurphy. Forbidden to say Mass in a church, his pay cut off, he said Mass in his house. He suffered hardship, living from savings, some earnings from writing, broadcasting and lecturing, and help from Quaker and Presbyterian friends. In the mid-1980s his relationship with the Dioceses of Down and Connor was re-established, and he was allowed to continue his ministry.

Personally, he had great gifts of head and heart, and was incapable of rancour. A strong belief was that it was important to share food to talk, as happened in Biblical times. Thus a lunch would last an afternoon.

It was characteristic that, instead of wreaths at his funeral, he asked for donations to the Ballymurphy Massacre Memorial Garden.

He was predeceased by his brothers James, Kevin, Liam, and Gerard: and is survived by his family circle.