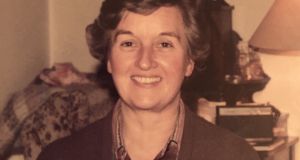 Noreen Kearney: liked to joke that many had the misfortune to die in Grangegorman Mental Hospital but that it had been her birthplace.

Noreen Kearney, who died recently at the age of 85, made significant contributions over several decades to the evolution of professional social work in this country, as well as to developments in policy and practice in many other areas of health and social service provision.

Noreen was the fourth of five children born to Peg and Joe Kearney. Her father was a psychiatrist and moved about the country with his young family, working in the network of district mental hospitals. He was based in Dublin at the time of Noreen’s birth in 1934, and she liked to joke that while many had the misfortune to die in the infamous Grangegorman Mental Hospital, she was unusual, if not unique, in that this was her birthplace. The family settled in Dublin when he was appointed to the post of inspector of mental hospitals at the Department of Health, a post he occupied until his premature death in the early-1950s.

Noreen was deeply impressed by the work of the Sacred Heart sisters from whom she received her secondary schooling in Leeson Street and, following her Leaving Cert, spent a short time in the Sacred Heart novitiate. In the late-1950s she studied social science at University College Dublin, and in 1962 gained a professional qualification in psychiatric social work from the University of Edinburgh.

On returning to Ireland, she worked initially in Belfast before being appointed to the position of psychiatric social worker with the Dublin Health Authority.

At this time in the mid-1960s, the Dublin Health Authority had embarked on a radical restructuring of mental health service provision and, under the leadership of Doctors Ivor Brown and Dermot Walsh, was in the process of moving towards what was referred to as “sector psychiatry”. This was a new organisational system in which multidisciplinary teams of mental health professionals catered – as far as possible through community-based services and facilities – for the needs of populations of designated catchment areas. Professional social work education was in its infancy in Ireland at this time and there were difficulties in recruiting and retaining social workers for the mental health services.

From her base at St Loman’s Hospital in Palmerstown where she combined direct client work with a managerial function, Noreen Kearney addressed this difficulty through the creation of a trainee scheme that incentivised social science graduates to commit themselves to working in the mental health services for at least a few years; and many of this original cohort of psychiatric social workers mentored by her went on to play leadership roles in the expansion of social work services that occurred in generic community care settings following the 1970 Health Act and the establishment of regional health boards.

In 1973, when Trinity College Dublin was developing its professional social work programme, she was appointed as lecturer at its department of social studies, and she remained at TCD (being promoted to senior lecturer in 1990) until her retirement in 1999.

She served as head of department at social studies from 1992 to 1996 and as dean of the faculty of business, economic and social studies from 1996 to 1999. She published relatively little; but her book (co-edited with Caroline Skehill), Social Work in Ireland: Historical Perspective, published after her retirement remains an important text for students of social work in this country.

In 1971 she was a founder member of the Irish Association of Social Workers (the professional body in this country), later serving as its chair. In the late-1960s and early-1970s she contributed to evolving public policy on illicit drug problems through her membership of the Working Party on Drug Abuse and the Committee on Drug Education.

Later, at various times between the 1970s and the 1990s, she participated in statutory attempts to combat poverty, serving for a period as chair of the Combat Poverty Agency.

During the 1990s, she was a member of the Women’s Health Council, as well as serving on the Expert Group on the Probation and Welfare Service. Following her retirement, Noreen devoted considerable time and energy to her work with the Katherine Howard Foundation, a charity that funds community-based projects for disadvantaged families. She also continued to be an active member of the Institute of International and European Affairs.

Retirement from Trinity allowed Kearney to indulge her passion for travel, and to spend time at her holiday home in west Cork – close to ‘Courtmac’, the scene of childhood holidays. Noreen was predeceased by her sister Anne and brother Tom, and is mourned by her sister Peggy, brother Eugene, niece and nephews and by a wide circle of friends.