Meet the women undertakers: ‘It’s one of the most rewarding jobs’ 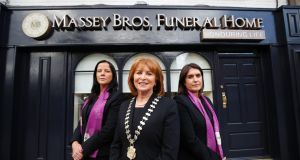 “We look like the Addams Family,” laughs Susan Maguire, casting her hand towards a family portrait hanging above the desk in her office.

The building she works in is across the road from the Robert Emmet memorial on Thomas Street in Dublin, sandwiched between a barber shop and a discount retailer.

The picture above her desk shows Maguire alongside her father Freddie, her mother Aileen and three out of her four brothers who run the family business with her.

She is a funeral director and heads this branch of Massey Bros Funeral Directors, established by her grandmother Cissie Massey to serve the local Thomas Street community in 1945.

It is a sunny afternoon in early September when I make my way there and the street is bustling with its characteristic blend of humanity – NCAD students and locals ambling in and out of Manning’s Bakery, tourists laden down with gift bags from the nearby Guinness Storehouse and children celebrating the end of another school day.

Outside it is warm and the street is brimming with life as I enter the quiet calm of the funeral home to meet Maguire and two of the women she works with, whose job it is to guide people through some of the worst days of their lives.

Undertaking has traditionally been a male-dominated industry, but according to the Irish Association of Funeral Directors about 20 per cent of Irish funeral directors are women, an increase of a third in the last decade.

At Massey Bros 60 per cent of their workers are women and this year there are two presidents of industry bodies among the company’s staff, both of whom are women.

“I personally think that is what sets Massey Bros apart from many other funeral directors,” says Maguire.

Do women bring something different to the role than their male counterparts?

“I’m not saying that we would have more empathy than men, but I suppose it can be just the detail when, let’s say, a woman comes in and she’s lost her mother. We know she’ll want mum looking her best,” she says.

“We can tune into that,” chimes in Mary Cunniffe, funeral director at Massey Bros Rathfarnham branch and president of the Irish Association of Funeral Directors.

Unlike Maguire, who started out in the family business working Saturdays aged 19, Cunniffe came to it “by accident” in 2000, after a long career in banking.

A couple of her close relatives had died within a short period and when a funeral planning company came into her branch to open an account, the stars aligned.

She packed in her bank job and went to work for Golden Charter as a regional planner. “It was the best move I ever made,” she says.

Fowley is the national president of the British Institute of Embalmers, having come to the job 10 years ago through her husband’s family who are funeral directors.

She says there is a misconception that embalming means just doing hair and make-up on a body, when it also involves draining bodily fluids, sanitising and preserving the body, to prepare it for display during a funeral.

That can make some people squeamish.

“Sometimes you have to be very careful of what you’re saying, because sometimes people don’t want to know. It frightens them, but it’s not a frightening process, I promise you,” she says.

Fowley also volunteers with Blake Emergency Services, a company that sends teams to respond to the aftermath of emergency situations, including mass fatalities.

She will not get into the details of specific incidents but says that volunteering has taken her to Ukraine and Iraq, and that seeing entire families wiped out has been a particularly difficult part of the job.

“When you see the paperwork that comes in with them it could be an itinerary from when they were setting off to start this amazing family holiday and then a plane crash happened. It’s devastating to see,” she says.

People react in one of two ways when they first hear that you are in the funeral business, says Cunniffe.

“It’s either a conversation stopper or starter, one or the other. Some people just freeze and others are just so intrigued by the fact that you are a funeral director and what it entails. ‘How can you do that job?’ and ‘Do you ever sleep at night?’ It can lead to a very interesting conversation.”

People’s attitudes to death and funerals have changed in recent years, says Maguire. The practicality of planning one’s own funeral, in what is referred to as pre-need, has become more popular and for many, it helps them to accept that they are dying.

Maguire describes a woman living alone who came into her office recently to plan her funeral, having no living relatives or close friends.

“After doing that with me last week she told me, ‘I can sleep now’, because she had no family. She knows nobody and she gave me a list of people to contact when she dies, so for her that’s peace of mind,” she says.

Cunniffe agrees that there is a definite trend towards pre-need and cites the example of another woman in the early stages of Alzheimer’s who wanted to plan and pay for her own funeral before she is lost to the disease.

“She told me she has two daughters and they have a hard time ahead of them so she doesn’t want them to have to worry about this. That took courage.

“I’ve often come out [from a pre-need meeting] thinking, ‘god, you’d swear I’m after booking a cruise for them’. They’re just so delighted to have that weight off their shoulders,” she says.

Does dealing with death on a daily basis ever get them down?

Maguire says it can be very difficult when faced with arranging the funeral of a child, but “you have to look after the client”.

Cunniffe also has days when she wonders whether she is strong enough, but “it’s then I have to say to myself ‘this family needs me’. That’s when I surprise myself, when I look back and wonder ‘how on earth did I do that?’”.

Some people might think the funeral business is depressing, or that you have to be cold or unfeeling to do the job, but Fowley says it is quite the opposite.

“Working with death makes you appreciate, treasure and respect life more and not take it for granted.”