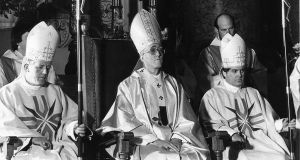 Born, June 5th, 1931 Died, October 10th, 2018 The career of Bishop Laurence Forristal, who has died in Kilkenny, aged 87, can be told in two parts, corresponding to the high point of the Irish Church’s authoritarian triumphalism in the 20th century and its subsequent precipitate fall from grace over the clerical child abuse scandals.

Up until the 1980s the story of Larry Forristal is of his rise in the church of Archbishops John Charles McQuaid and Dermot Ryan as an archetypal cleric, whereas, after 1990, he is caught up in the Irish church’s cover-ups of the scandals, while at the same time searching for policies to prevent such abuses ever happening again.

His not unnotable place in ecclesiastical history is recorded in the 2009 report of Judge Yvonne Murphy into the Archdiocese of Dublin, one which damned him with faint praise. Of Dublin’s eight auxiliaries, the report said “Bishop Forristal was the only bishop to unequivocally admit in evidence to the commission that he may not have handled matters satisfactorily”.

Born in Jerpoint, Thomastown, Co Kilkenny, he attended primary school in the Mercy Convent School and the Boys’ National School in Thomastown. But his family was sufficiently well off to send him to Mount St Joseph’s Cistercian College in Roscrea, Co Tipperary, for his secondary schooling .

Admitted to study philosophy for the priesthood at the Dublin archdiocese’s seminary of Holy Cross College, Clonliffe, he simultaneously took a BA at University College, Dublin, then situated in Earlsfort Terrace, now the National Concert Hall.

Sent to Rome by Archbishop McQuaid to complete his theological studies, he was ordained on December 21st, 1955. Staying on in Rome for post-graduate studies, he added an STL in theology and a licentiate in canon law to his curriculum vitae.

On his return in 1957 to Dublin, he was assigned by Archbishop McQuaid to work in his chancellery in Drumcondra, an appointment which was extended by McQuaid’s successor, Archbishop Ryan, until 1980.

During this challenging period, he was also weaned in parish work as an assistant priest in Raheny, 1967-1974; and administrator of Rivermount, south Finglas, 1974-7, becoming parish priest there in 1977.

A sign that he was being marked out for high office came also in 1977 with his appointment as vicar general and a prelate of honour with the title of monsignor. Being part of inner governance meant gave him a ringside seat for the visit of pope John Paul II in 1979.

It was no surprise, therefore, when the papal nuncio, Archbishop Gaetano Alibrandi, announced his appointment as an auxiliary bishop of Dublin on December 3rd, 1979. His episcopal ordination followed in the Pro-Cathedral on January 20th, 1980. Nor was there any surprise when Archbishop Alibrandi confirmed Bishop Forristal’s promotion in June 1981 as Bishop of Ossory to succeed the social-minded Bishop Peter Birch. The diocese covers most of Kilkenny and parts of counties Laois and Offaly.

Straight away, he threw himself into preparing for the bicentenary of St Kieran’s College – the first post-Reformation seminary in Ireland which opened in 1782. But the celebrations did not last too long. In June 2004 he celebrated a Mass for past pupils at the closure of its boarding school.

On account of his canonical skills, Bishop Forristal, in 1990, had been appointed by his fellow bishops to chair an unpublicised internal committee assessing potential legal implications of clerical child sexual abuse cases. And in 1994, he was appointed to chair a church committee which drafted the 1996 Child Sexual Abuse: Framework for a Church Response.

At its high-profile launch the usually loquacious Cardinal Cahal Daly and a sheepish-like Bishop Forristal wilted under vigorous questioning from journalists. The churchmen were unable to confirm a regulatory status for the guidelines: nor could they aggregate from diocesan returns an accurate scale of clerical abuse nationally.

Although the framework recommended that all credible allegations against priests should be reported to the gardaí and health authorities, Bishop Forristal failed to follow these. The Murphy Commission highlighted how over 16 years he mishandled allegations by two Dublin women that one of Bishop Forristal’s priests, named as “Fr Cicero”, had sexually abused girls as young as eight.

The commission found that, ‘‘Bishop Forristal very fairly accepted responsibility for the delays in dealing with Fr Cicero in the late 1990s”, but added that the then Archbishop Connell and his chancellors were continually urging him to take action.

However, the commission said it was “extraordinary” that Forristal and the Dublin archdiocese had allowed the domineering Msgr Gerard Sheehy, Fr Cicero’s superior at the Dublin Marriage Tribunal, to have undue influence in determining how allegations against the abuser were handled.

While he did not regard it as an excuse, Bishop Forristal pleaded that both he and Fr Cicero had extremely serious health problems around this time (1997-1999). While the commission was satisfied that health problems may have contributed to the delay – and that there was no active conspiracy to prevent Fr Cicero having assessment and treatment – it regarded the delay as unacceptable.

In 2007 Bishop Forristal retired on age grounds with the status of Bishop Emeritus. He is survived by sisters Kathleen, Nan and Mary, brother-in-law Eamon, sisters-in-law Maureen and Geraldine, nephews and nieces; Bishop Dermot Farrell and Bishop Emeritus Seamus Freeman.

Apartment or house: which is the best buy?
3

‘Cooking for yourself is cooking for someone you love’
10