‘Sounding like a missionary on climate change does not work’ 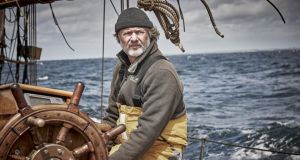 If the world’s elite start colonising another planet any time soon, Arved Fuchs could be in demand as a guide and pilot. The 65-year-old German marine engineer knows what it feels like to wake with eyelashes frozen over and his circulation hard-tested in fingers and toes.

He was the first man to ski to both the geographic North Pole and the South Pole in one year, relying on conventional sextant navigation.

Similarly, when he crossed the Antarctic continent in 1989-1990 with Italian alpinist Reinhold Messner, it was without satellite technology. Fuchs has entrusted his life to trained-dog sled teams and to the wisdom of Inuit communities. So one feels he wouldn’t be rushing to answer calls from those who believe the response to climate change is to find somewhere else to exploit.

“My first visit was to the Arctic in 1979, and it was not long before I realised that I was becoming a witness,” he says. A decade later, when he set his North and South Pole record, a certain British prime minister with a chemistry degree – the late Margaret Thatcher – was already warning of the impact of carbon dioxide in the atmosphere.

“Nobody was really taking it so seriously back then,” Fuchs recalls, speaking by phone from Germany shortly after publication of the UN Intergovernmental Panel on Climate Change’s latest and somewhat terrifying report.

Fuchs knows well that the predictions about extreme weather, wild fires, dying coral reefs and food shortages by 2040 won’t cost US president Donald Trump any lost sleep. Nor is it likely to have any impact on Brazilian far-right presidential candidate Jair Bolsanaro, who has promised to withdraw his country from the Paris Agreement climate deal due to differences on how the Amazon should be protected.

However, the German harbours hope in humanity – reflecting how he has lived his life. The report has given the globe just over a decade to arrest the hurtle towards a 3-degree rise. “And sounding like a missionary” on the climate justice issue is a switch-off, he believes.

“Treating people like children on this issue does not work. People have to engage at an emotional level,” he says. His own emotional involvement dates back to his mid-20s, after he completed a merchant navy apprenticeship in Germany, and studied ship operation technology at university.

His first of many expeditions was in 1977, and in 1983 he spent 70 days crossing the Greenland ice sheet along the 71st parallel with dog sled teams. The following year, he circumnavigated Cape Horn in a kayak. He has also paddled to the magnetic North Pole and to the “Cradle of Storms”, the native American name for the Aleutian archipelago.

It took him 56 days of pure and exhausting slog over 1,000km to reach the geographic North Pole in May 1989. He was barely home when he set out for Antarctica, and reached the South Pole on skis that December.

His companion, Messner, who made the first solo ascent of Everest and the first ascent of it without oxygen with climber Peter Habeler, wrote about the personal strains in his book Antarctica: Both Heaven and Hell.

Fuchs had much thinking time during that traverse, and he says his thoughts were frequently about Ernest Shackleton. The Irish explorer had set a “farthest south” latitude of 88° 23’ S, a point only 112 miles (180km) from the South Pole in 1909, and told his wife Emily on his return that a “live donkey was better than a dead lion”.

“I realised that Shackleton had really wanted to do this, but it was his unscheduled rescue mission at sea some years later that turned out to be far more dangerous, and one he had no time to plan for,”he says.

It would only be a matter of time, then, before Fuchs would plan to recreate Shackleton’s epic 720-nautical-mile sea journey from Elephant Island and traverse of South Georgia of 1916, after their ship Endurance on the Imperial Trans-Antarctic Expedition was crushed in sea ice.

“When we set out in 2000 to follow in his tracks, we didn’t live for a year on seals, and we didn’t eat penguins, but we tried to make it as authentic, while also having safety back-up,” Fuchs says. “We set off from close to the Antarctic peninsula.

Treating people like children on this issue does not work. People have to engage at an emotional level

“The conditions were very difficult with strong currents, enormous icebergs and unfavourable winds, and we thought we might suspend it all when we got to Elephant island as we were so exhausted! But after one good night’s sleep, we were off again,” he says.

“We tried as much as we could to use the sextant, but we would have missed South Georgia entirely if we were relying on it alone as there were no sun sights to take a reading.

“So we had to use GPS. That’s why I can only say we got close to what Shackleton and crew achieved, but what he did was really second to none . . .”

Fuchs had by then already recorded many ice miles in his 24m fishing cutter, Dagmar Aaen. In 1991, his was the first western expedition to receive permission from the former Soviet Union to visit the Franz-Josef-Land archipelago and military base in the Arctic Ocean.

Too much ice defeated the cutter’s first attempts through the Siberian northeast passage, and so its skipper turned around and navigated the northwest passage in northern Canada.

In 2002, he succeeded on his fourth attempt through the northeast passage, and he then repeated a northwest passage traverse, completing the entire circumnavigation of the North Pole without icebreaker support over a 2½-year period.

Fuchs had met Irish sailor Paddy Barry up in Greenland in 1993, and was able to advise him, skipper Jarlath Cunnane and his crew of Northabout on its ventures to polar regions. Northabout completed the first eastwest circumnavigation of the Arctic ice cap by a small yacht after several seasons in 2005.

By 2006, the German adventurer already knew he had to change focus.

“I felt that I could no longer come back and show nice photos and tell interesting stories, without speaking about what was and is happening,” he explains. “I am not a scientist, but I began inviting scientists to conduct research on my expeditions. I could bring them to places where they could see what was and is still happening.”

So he and his wife Brigitte Ellerbrock, an architect who often sails with him, and colleagues held the first of a series of international youth camps on climate action in 2007. Fuchs regards such initiatives as “small steps”, but essential ones when global leaders seem unable to take large ones. Student participants may know the theory, but “react differently when confronted with the direct consequences”, he says.

Fuchs is just back from another research expedition to northwest Greenland and has left his cutter in Iceland while he spends his winter writing – he is author of 18 books. He has no plans to come ashore permanently, with too much to do.

“The people who have taught me how to work with dogs, how to ski, who are now losing hunting grounds due to erosion and thawing permafrost and warming, rougher seas, are my friends . . .”

Arved Fuchs will give a talk “In Shackleton’s Wake” at the Shackleton Autumn School in Athy Heritage Centre-Museum, Co Kildare, on Sunday, October 28th, at 11.20am, admission €10. Details of the full programme, which will be opened by Norwegian ambassador to Ireland Else Berit Eikeland on October 26th, are at shackletonmuseum.com