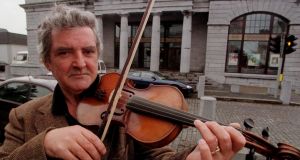 Tommy Peoples. Although his playing was clearly rooted in Donegal, he played in an austere style that was all his own. Photograph: Paddy Whelan

Traditional music lost one of its most revered players and one of its greatest advocates with the passing of Donegal fiddler and composer Tommy Peoples. His deep, soulful music-making struck a chord with musicians, singers and listeners alike, and his tune compositions (many of which he never even claimed as his own) have wended their way into diverse repertoires at home and away.

Tommy was instrumental in the great revival in traditional music, and was an early member of The Bothy Band, formed in 1975 by Dónal Lunny. This was an ensemble that had an enormous impact on how traditional music was interpreted, with Peoples’ utterly distinctive and exotic fiddle style playing a key role in shaping the band’s early sound.

Although his playing was clearly rooted in Donegal, Tommy played in an austere style that was all his own, and in which there was no room for ego. He took the music, unpacked it and completely reassembled it, all the while retaining its essence and imbuing it with a deep humanity and creativity. Peoples’ playing was a total expression of himself as a person. There was so much of him in every note and in every space, the latter being every bit as important as the former. A man of few words, Tommy’s art said everything about him. He had what poet Theo Dorgan called a “fierce grace” about him; a graciousness that came with a certain ferocity and an unbending integrity. There was also, though, a carefully concealed strain of mischief in him.

Tommy was born in Letterkenny in 1948 and grew up in St Johnston in east Donegal, where he got music from his father Tom and from his mother Mary Ellen Martin’s side of the family. He moved to Dublin in the 1960s, and for a time, he was a member of An Garda Síochána. He married Mary, daughter of renowned Kilfenora Céilí Band pianist Kitty Linnane and moved to Clare where he raised his family. He moved to Boston for a brief period, where he made a huge impact on listeners who were enthralled by the grace and danger of his music.

For many years Tommy lived in Toonagh, outside Ennis, and was a generous companion to local and visiting musicians. He was the first recipient of two TG4 Gradam Ceoil Awards, as Musician of the Year in 1998 and subsequently, as Composer of the Year in 2013.

In 2010 Tommy was elected by a huge vote to membership of Aosdána, and to his surprise, at his first general assembly meeting, found his fellow members queuing up to offer homage to him. Indeed it was Tommy who honoured Aosdána by becoming a member, many felt. This year the Willie Clancy Summer School paid tribute to him, in recognition of his role as “a driving force in the great revival of interest in the music in the latter half of the 20th century”.

He composed his tunes using written notation, (a relatively unusual phenomenon in an oral tradition), but that never constrained him when it came to playing them, when in a split second, he could take the tune off in an unexpected direction with complete confidence. That was the mark of a master. The Coffin Ships and The Wishing Well are just two examples of tunes that epitomise his inventive compositional style.

In 2015 he published Ó Am go hAm – From Time to Time: Tutor, Texts and Tunes which contains complete notations for 130 original tunes as well as many picaresque accounts from his life and times.

His immense legacy lives on in his magnificent swathe of tunes, in his recordings, in his companionable session playing and in the music of his daughter, Siobhán, who inherited her father’s integrity and ability to create works of great beauty.

Tommy Peoples was born in 1948 and died on August 4th, 2018, after an illness. He is survived by his wife Maria, daughters Siobhan, Neasa and Grainne, sons Cronan and Lochlann, his friend Julie Costello Pichilis, son in law, nine grandchildren, great grandchild and his sisters Monica (Gibson) and Mary (Gallagher).