Seán Cromien obituary: Secretary general of Department of Finance under MacSharry and Haughey 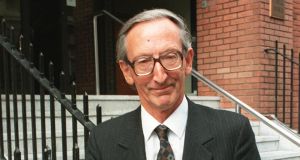 Outside work Sean Cromien had a passionate interest in nature and as a keen amateur naturalist. Photograph: Matt Kavanagh

Sean Cromien was a senior civil servant who played a crucial role in rescuing the state from bankruptcy in the period after 1987. His unassuming manner disguised a formidable intelligence but there was no disguising his profound commitment to public service and the welfare of the State.

As secretary general of the Department of Finance in the period 1987 to 1994 he was one of the key figures who helped to steer the country out of the deep recession which had dogged it during the 1980s.

He formed a strong bond with minister for finance Ray MacSharry and, between them, they ensured that the Fianna Fail minority government led by Charles Haughey stuck to a tough financial regime as the first step on the road to economic recovery.

The sustained economic growth that developed in the 1990s can be attributed to the action begun in 1987 to wrestle public spending under control after the years of profligacy that had their origin in the Fianna Fáil election manifesto of 1977.

When Haughey’s minority government came to power in March 1987 the country was stunned at the decision not simply to implement John Bruton’s draft budget, which had brought the Fine Gael-Labour coalition to an end, but to toughen some of its key measures.

That decision was partly due to the firm advice given to the incoming government by the Department of Finance. Cromien was the senior member of a three-man “Financial Review Board” along with his second secretary Bob Curran and economist Colm McCarthy, which became known as “An Bord Snip” which dictated public spending policy over the following years. As well as establishing a bond with MacSharry he also developed a good relationship with Haughey who listened carefully to his advice.

He also played an important role during the currency crisis of 1992-93 which led to the devaluation of the Irish pound on January 30th, 1993, when it came under sustained attack from financial speculators after Britain’s withdrawal from the European Monetary System.

Cromien kept a diary from the day he joined the civil service in 1959. He deposited the diaries in the National Library and it is expected that they will become an important source for the period when they are opened up to researchers.

Sean Cromien was born on October 20th, 1929, one of a family of two boys and two girls who lived at Fingal Place in Stoneybatter close to the centre of Dublin. His father was a cooper who worked at the nearby Jameson’s Distillery in Smithfield.

There was a strong republican tradition in the family. His mother was a member of Cumann na mBan and his Uncle Jack, a member of the Irish Volunteers, was killed in 1916. Two grand uncles were members of the Irish Republican Brotherhood.

Cromien, who started school at a younger age than most of his contemporaries, attended St Paul’s Christian Brothers’ School in North Brunswick Street (Brunner). He did well enough in his Leaving Certificate in June 1946 to qualify for a university scholarship. However, he was too young as the entry requirement was 17 so he returned to school for another year.

He qualified for the Corporation scholarship the following year and became a student at UCD graduating with a first-class honours degree in economics in 1950.

As a boy and young adult he was a member of the Legion of Mary and did voluntary work at the Morning Star Hostel for Homeless Men in Brunswick Street and also in Grangegorman.

He remained at the Department for the rest of his career becoming second secretary in charge of the Budget and Economic Division in 1977. He was appointed secretary general in 1997 and remained in the post until 1994. During his time in these positions he oversaw the production of 19 budgets.

Outside work he had a passionate interest in nature and as a keen amateur naturalist. He had a deep knowledge of the flora and fauna of Ireland. While he was known for his interest in birds he and had a particular interest in dragonflies and butterflies.

He also enjoyed swimming and was president of the Half Moon Swimming and Water Polo club for five years in the 1980s.

A teetotaller, who proudly wore the Pioneer pin throughout his life, Cromien was a sociable individual despite his somewhat forbidding appearance. He read widely not just natural history and history but literature, poetry and philosophy. He was particularly fond of the poetry of Yeats and Kavanagh.

His commitment to public service continued after his retirement when he served on a number of government advisory committees. He was appointed acting director of the National Library for a period in 1997.

Among his other activities he was president of the Zoological Society of Ireland from 1998 until 2001 and a member of the diocesan finance committee of Catholic Archdioceses of Dublin.

In November 2006 he was elected a member of the Royal Irish Academy and was also a member of the council of the Institute for International and European Affairs and a fellow of the Irish Management Institute.

In spite of all his accomplishments and achievements he maintained life-long friendships with old school friends, Departmental colleagues and members of the Half Moon Club.

He had simple tastes, his only extravagance was his fondness for fast sporty cars. His nieces and nephews fondly remember being taken for drives in his MG sports car, Jaguar and Triumph Stag. In later years he drove the more conventional Honda Accord.

Family and close friends remember him as a raconteur who was able to laugh at his own eccentricities. He died peacefully at the Beneavin House Care Home, Glasnevin, after suffering from dementia in his final years. He is survived by his three nieces and two nephews. His last surviving sister, Aileen, predeceased him by a few months.