What was the last gift you bought? ‘I bought someone a toll tag’ 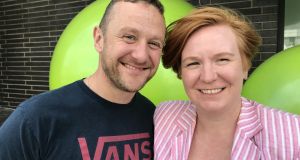 PJ Gallagher and Una McKevitt. When did you last cry? “Watching the Irish women’s hockey team. It’s sport I knew absolutely nothing about. Protestant hurling.”

Una: Watching about five episodes of This Is Us.

PJ: Watching the Irish women’s hockey team. It’s sport I knew absolutely nothing about. Protestant hurling. I don’t know the rules, but I was obsessed. When the women got into the final I was like ‘holy f**k’.

Do you have any tattoos and what do they mean?

PJ: An awful lot. Very few of them mean anything, if I’m being honest. I just love tattoos. I have the Poolbeg stacks, a nurse for my forearm – my mother was a nurse – otherwise, they’re just silly meanings. An ace up my sleeve, I have one because I loved Evel Knievel, an eagle on my chest, a devil on my belly, my legs are covered.

Una: When I started hanging out with PJ, I started getting tattoos. I have no mind of my own.

PJ: I had this huge Denis the Menace-style jumper that went way down to my knees. Like every other kid in the 80s and 90s, I wore clothes five times too big for me.

Una: I can remember everything I wore in sixth class. That was an important fashion year for me. 1987. A lot of brown cord and Adidas runners.

PJ: I had a pair of Hi Tec runners I loved, but back when you tied your laces so tight the two sides used to meet, the laces broke and I broke my own nose.

What is the greatest television show of all time, in your opinion?

Una: There was an Enid Blyton book called Five Find-Outers and Dog, and I remember it appeared on the television once and then never appeared again. It’s like my “Rosebud”. Where is it? I need to find it? It just left. That was the danger of watching TV in the 80s.

Una: The English countryside is really nice. When I’m thinking about where to go on holiday, I forget about it. Then I’m like, ‘Why didn’t I just go to Cumbria or Kent? That would have been nice.’

PJ: Colombia. Going to Bogota and hearing all these stories about how dangerous it is – it’s a load of nonsense. It feels intimidating because there’s loads of curious people who want to talk to you, but it’s one of the great cities – so much to explore and discover.

What’s the worst job you’ve ever had?

PJ: In Intel in Leixlip. I think it was supposed to be something to do with air conditioning, but to this day I couldn’t tell you what my job was. We had to put on these big space suits and I had a meter. You put the meter into these tubes that blew air, wrote down the number and then handed it to a man. I hated it so much.

Una: I became a godparent for the first time – there’s no god involved, but you know what I mean. I bought them a handmade Irish oak swing with a Winnie the Pooh quote on it.

PJ: I bought someone a toll tag. I think it’s the best present ever. Free tolls all over the country, forever.

PJ: No! I didn’t f**king kill them. Just sits in the windscreen and you never have to worry about tolls again. I thought it was a quite a thoughtful gift.

What was the first film you saw in the cinema?

PJ: The Empire Strikes Back in the Ambassador. We parked outside the pro-cathedral. I can still remember the day so well. I was so excited. It was amazing.

Una: The first one I remember was Krull in Glasthule. It was my birthday party.

PJ: Bass guitar. I played in punk bands when I was younger. Really badly.

PJ: Any kind of cheesecake.

Una: Pavlova, but I can never order it because it’s too risky. If the meringue isn’t homemade, game over.

What is the closest you’ve been to death?

Una: My dad always said swim parallel to the shore, but last year, for whatever reason, I was swimming and I kept going out to a buoy. I turned around and wasn’t making any headway. I started panicking and I was going under. I rolled on to my back. My chest was about to kill me. That was pretty scary.

PJ: Crashing when I was racing motorcycles. I had one particular crash in Mondello Park. It felt as though the bike just disappeared from under me when I was going as fast as I could around the corner.

PJ: I felt my back hit the pavement and I just remember losing consciousness. I thought that was it.

PJ Gallagher & Una McKevitt stage the world premiere of their new play, Madhouse, which runs at the Abbey Theatre on the Peacock Stage at Dublin Fringe Festival 2018; fringefest.com